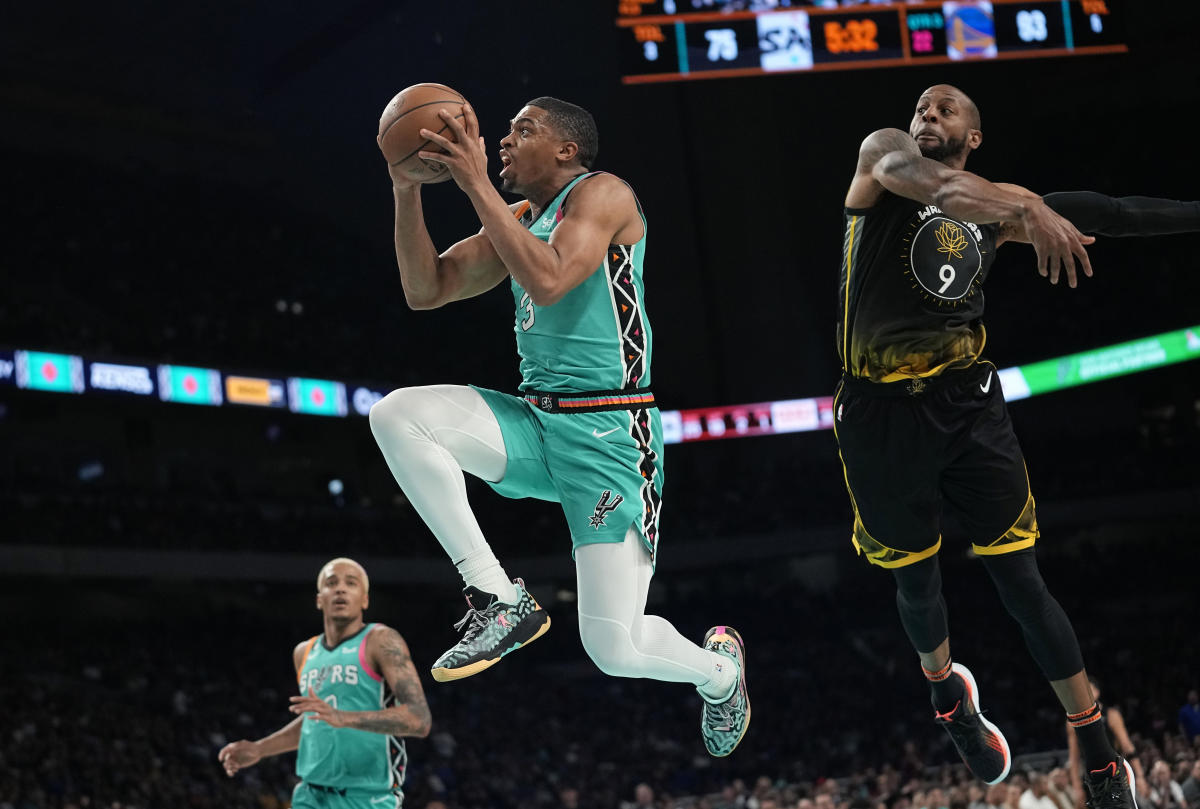 SAN ANTONIO (AP) — In an environment they had never faced, the Golden State Warriors relied on their experience to make it feel like just another game.

Jordan Poole scored 25 points, Donte DiVincenzo added 22 and the warriors beat the San Antonio Spurs 144-113 on Friday night before an NBA record crowd of 68,323 at the Alamodome.

“It was pretty electric, a really special occasion playing in front of the largest crowd in NBA history,” Poole said. “I’m glad we got the win.”

The attendance shattered the previous regular-season record of 62,046 who watched Michael Jordan and the Chicago Bulls play the Atlanta Hawks at the Georgia Dome on March 27, 1998.

“Obviously, I hate to lose. But with the turnout, how can you be mad?” Spurs forward Keldon Johnson said. “The Spurs fanbase surpassed anything we could imagine. That made tonight special.”

The Spurs normally play at the AT&T Center but returned to their former home as the franchise celebrates its 50th anniversary.

While returning to the Alamodome stirred fond memories of the franchise’s first NBA championship in 1999 for San Antonio coach Gregg Popovich and fans, reality wasn’t as kind.

Golden State set its season high in points, surpassing its previous high in a 143-141 victory in double-overtime against Atlanta on Jan. 2.

The game started with a video tribute to Steve Kerr, who played four seasons for the Spurs beginning in the 1999 and ended with the Warriors coach embracing Popovich, his friend and mentor.

“The presentation of the game was spectacular,” Kerr said. “For me it was a bit of a trip down memory lane. I got emotional before the game. They played the video and introduced me. To get an ovation from 68,000 fans gives you chills. This was a really special night. The Spurs made it special.”

Kerr knew how difficult playing in the cavernous facility is after playing at the Alamodome. That’s why he ran a long practice Thursday night to help his players acclimate to the new surroundings, and it helped.

Golden State had 38 assists while leading by as many as 39 points.

Tre Jones had 21 points for San Antonio, which has lost four straight and seven of eight. Johnson added 17 points.

After the Warriors missed their first three shots, Thompson drained a 3-pointer to spark a 17-4 run. Golden State would shoot 39% on 3s and 50% from the field in the opening quarter.

“It was a really cool environment,” Kerr said. “Very unique with the court in the middle of the dome. Maybe it took a little bit for our guys to get adjusted, but all in all our guys came and were very aggressive.”

When the Warriors opened a 30-point lead in the four quarter, Spurs fans responded with the wave for five minutes straight.

“The fans enjoyed themselves, even though we were getting our ass kicked,” Popovich said. “They seemed to be having a hell of a time, so there must have been a lot of beer sales out there.”

Warriors: The blowout enabled Kerr to sit Curry and Thompson in the fourth quarter. They played about 23 minutes before both exited with about three minutes left in the third quarter. …Golden State is 4-16 on the road this season. The Warriors were 22-19 last season away from home.

Spurs: San Antonio G Devin Vasell missed the game following left knee surgery Wednesday in New York. Popovich said the surgery went well. There is no timetable for his return, but Popovich said it will be after the All-Star break. … San Antonio opened a four-game homestand that concludes Jan. 20 against former Spurs forward Kawhi Leonard and the Los Angeles Clippers.

Warriors: At Chicago on Sunday.