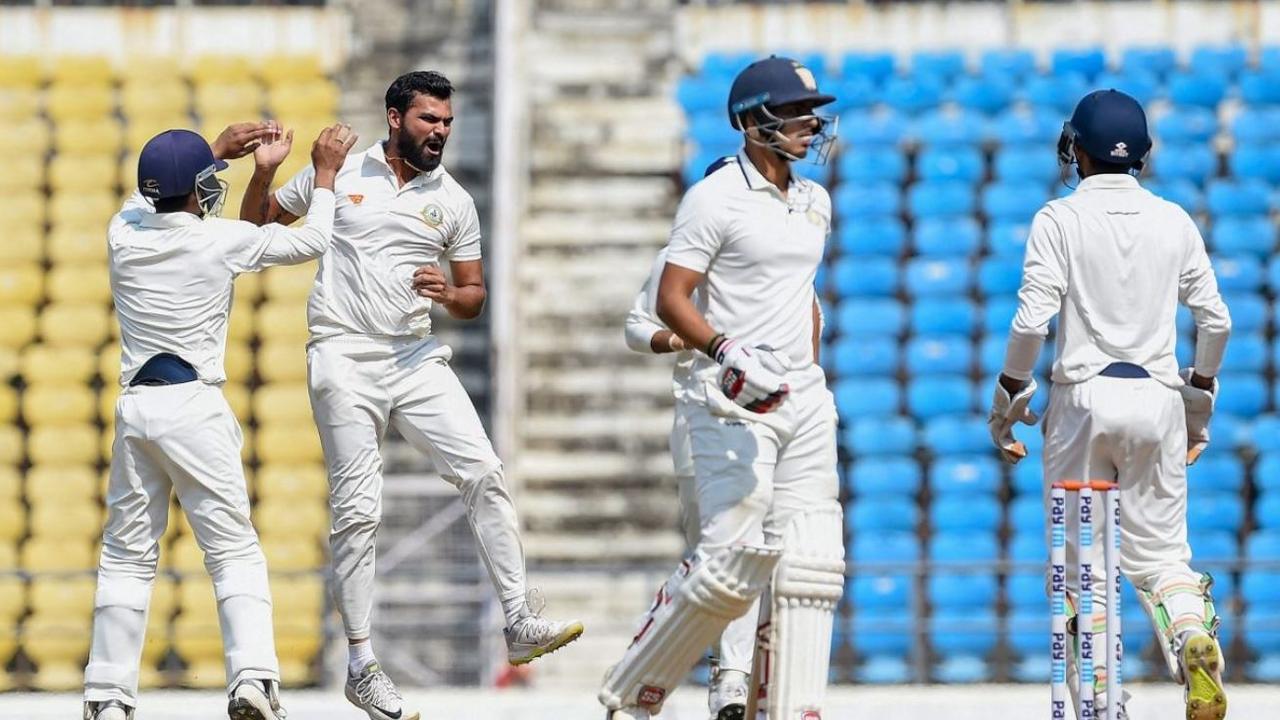 Ashton Agar’s chances of a playing the first Test of the upcoming Border-Gavaskar Trophy have received a massive boost thanks to a record-breaking collapse in the Ranji Trophy on Thursday.

Tasked with chasing 72 for victory against Vidarbha at Nagpur’s Vidarbha Cricket Association Stadium, where India and Australia will face off next month, Gujarat was rolled for just 54 in the fourth innings, with only one player reaching double figures.

Nine of the wickets that fell in the fourth innings were taken by left-arm orthodox spinners, the other being a run out.

Player of the match Aditya Sarwate, who boasts a similar bowling style to Agar, picked up 6-17 from 15.3 overs, while fellow tweaker Harsh Dubey snared 3-11 from nine overs.

Gujarat No. 3 batter Siddharth Desai scored 18; the second-highest contributor was extras with 10.

It was the lowest target successfully defended in Ranji Trophy history, the previous record set in 1948/49 when Bihar defended a 78-run target against Delhi.

Earlier in the match, Gujarat spinner Siddharth Desai, another left-arm tweaker, took 6-74 to help limit Vidarbha to 254 in the second innings.

Curiously, Vidarbha was topped for 74 in the first innings of the low-scoring affair, with all 10 wickets falling to seam bowlers.

Regardless, Gujarat’s cataclysmic fourth-innings collapse is encouraging for Agar, the only left-arm orthodox bowler in Australia’s 18-player Test squad for the Border-Gavaskar Trophy.

Mitchell Starc has already been ruled out of the first test in Nagpur, meaning Agar and Scott Boland will seemingly be fighting over the vacancy for the series opener.

However, national selectors may also be tempted to give a test debut to West Australian quick Lance Morris, who has been working on his reverse swing over the past couple of months.

The first test between India and Australia will be played on one of the venue’s center wickets rather than the side pitch where Vidarbha’s spinner wreaked havoc on Thursday.

Australia will return to the venue where Jason Krejza ran riot 15 years ago for the first Test of the Border-Gavaskar Trophy.

In 2008, the unknown off-spinner claimed 12-358 against India at Nagpur’s Vidarbha Cricket Association Stadium in one of the modern era’s most remarkable Test debuts.

India won the match by 172 runs, and it remains Australia’s only Test appearance at the venue.

Until recently, the Gabba was deemed to be Australia’s fortress.

But India has their own equivalent — Delhi’s Arun Jaitley Stadium, previously known as Feroz Shah Kotla Stadium, where they haven’t lost a Test match since 1987.

Australia has played seven tests at the venue, but their lone victory took place was way back in 1959 when Richie Benaud was skipper.

Of the two Tests Australia has played at Arun Jaitley Stadium this century, 27 of the 30 wickets were taken by spinners.

There will be an element of the unknown for both sides ahead of the third match at Dharamshala’s Himachal Pradesh Cricket Association Stadium, which has only hosted one test in history.

Back in 2017, India secured an eight-wicket win over Australia at the picturesque venue to reclaim the Border-Gavaskar Trophy. Steve Smith peeled off a classy century, his third of the series, while David Warner and wicketkeeper Matthew Wade smacked fifties — but no other Australians contributed with the bat.

Nathan Lyon claimed a five-wicket haul in the first innings, finishing with match figures of 5-111.

Previously, Australia faced New Zealand in Dharamshala during the 2016 T20 World Cup, with the Kiwis winning by eight runs.

Australia has never played Test cricket at Ahmedabad’s Narendra Modi Stadium, the biggest cricket stadium in the world, but it’s expected to be a raging turner.

In the first Test, England was rolled for 112 and 81, with only one of the 20 wickets taken by a seam bowler. Indian spinner Axar Patel, named in the Test squad to face Australia, claimed career-best match figures of 11-70.

If there was a venue where Indian tweakers Ravichandran Ashwin and Patel could absolutely demolish Australia’s top order, this is it.