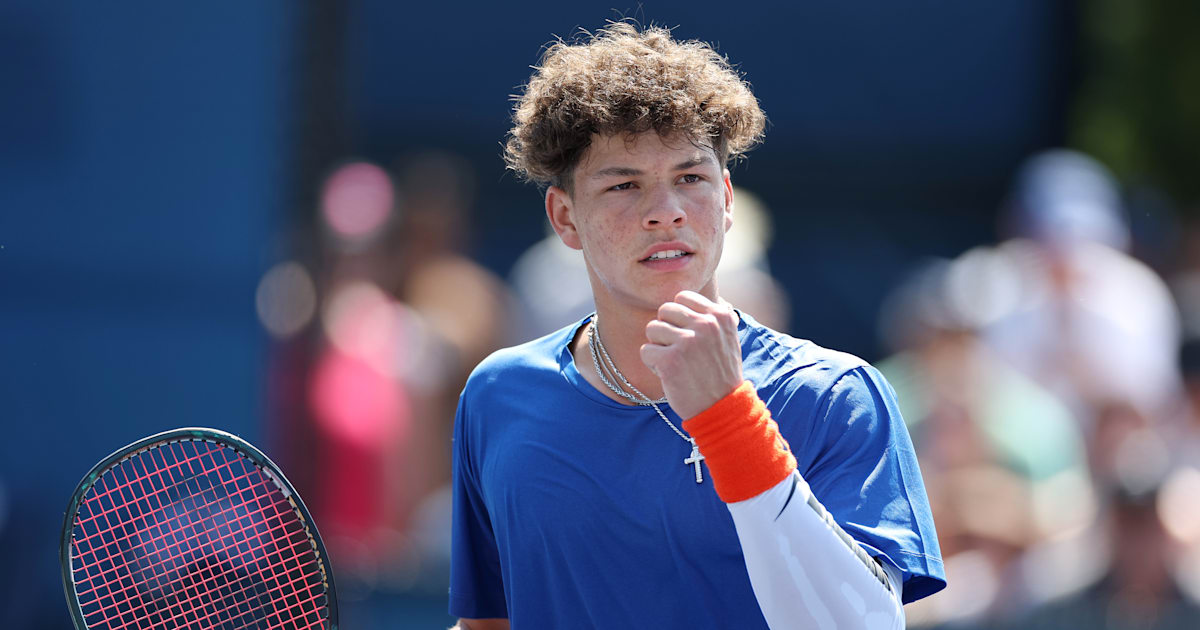 Ben Shelton is being called the “future of American men’s tennis”.

It’s a title that will undoubtedly weigh heavy in a nation that hasn’t seen men’s Grand Slam success since Andy Roddick lifted the US Open trophy in 2003.

But so far, the signs are good for the 6’3 [1.9m] Atlanta native, who boasts an explosive left-handed serve that reportedly averages 126mph.

The 20-year-old is now signed up with Roger Federer’s management firm, TEAM8, shares the same agent with Coco Gauff, and receives coaching from his father. It’s safe to say that Shelton is in good hands.

He traveled abroad for the first time to take part in 2023 Australian Open.

Below, we take a closer look at the tennis prodigy’s background, and reveal some interesting facts that you may not know about him.

1 – Tennis is in Ben Shelton’s DNA

As the son of a former tennis professional-turned-coach, you could say that Shelton’s destiny was to follow suit.

He reached at least the second round of all four Grand Slams in both singles and doubles, with a fourth round of Wimbledon in 1994 being his best finish.

In 2012, Shelton Snr. was appointed head coach of the University of Florida men’s tennis team, where his son would eventually help him land the NCAA Division I title. But more on that below.

2 – American football was his initial choice of sport

Despite Shelton Jnr.’s meteoric rise in tennis, American football was, in fact, his first sporting love.

More out-going than his father, the left-handed quarterback initially preferred the thrill of team sports.

“I kind of accepted at an early age that tennis probably wasn’t going to be his thing. I thought of team sports. He’s way more social than I was at that stage. I was more of an introvert and he’s a total extrovert. He’s loud and outgoing and has just so much energy,” Bryan told ATP tour.

“My parents wouldn’t let me play football and I always said if I had a son, and he wants to play, I’ll let him play.”

While Bryan Shelton was coaching tennis at Georgia Tech, he got to know NFL and Detroit Lions legend Calvin Johnson_,_ who was playing for the university at that time.

“He (Johnson) actually came to one of my birthday parties when I was maybe nine and gave me a signed ball,” Ben Shelton revealed.

Ben decided to pledge his future to tennis at the age of 12, and the move paid dividends.

In 2021, with Bryan as coach and son Ben as a freshman player, the Florida men’s team delivered its first-ever national championship with a 4-1 victory over Baylor.

Despite his precious natural talent and rapid rise in tennis, Shelton remains grounded thanks to his father.

Aged 16, Ben, like many talented junior players, thought it was time to get experience playing overseas.

However, the idea was quickly rejected by Bryan, who pointed out that his son had no need to test himself abroad when he wasn’t even No. 1 for his age in the United States.

To this day, Shelton remains a process-driven player, who focuses on not getting caught up in the peaks or troughs of being a tennis player.

Shelton took his father’s advice so seriously, that his first ever trip outside the USA came in 2023 for the Australian Open!

“I’m really excited to be out here full time,” Shelton told ATP tour. “Hopefully meet some awesome people, make some good friendships. I love playing tennis and competing so I hope it’s going to be a really fun year.”

Nick Kyrgios (middle) and Ben Shelton (left) take part in a coaching clinic ahead of the 2023 Australian Open in Melbourne. (2023 Getty Images)

Despite now traveling around the world to further his tennis career, Shelton isn’t neglecting his studies.

But rather than distract him from his athletic pursuits, Shelton finds that it gives his life a better balance.

“Definitely nice to have something outside of tennis that I can dive into or spend time doing, not become too one-tracked.”