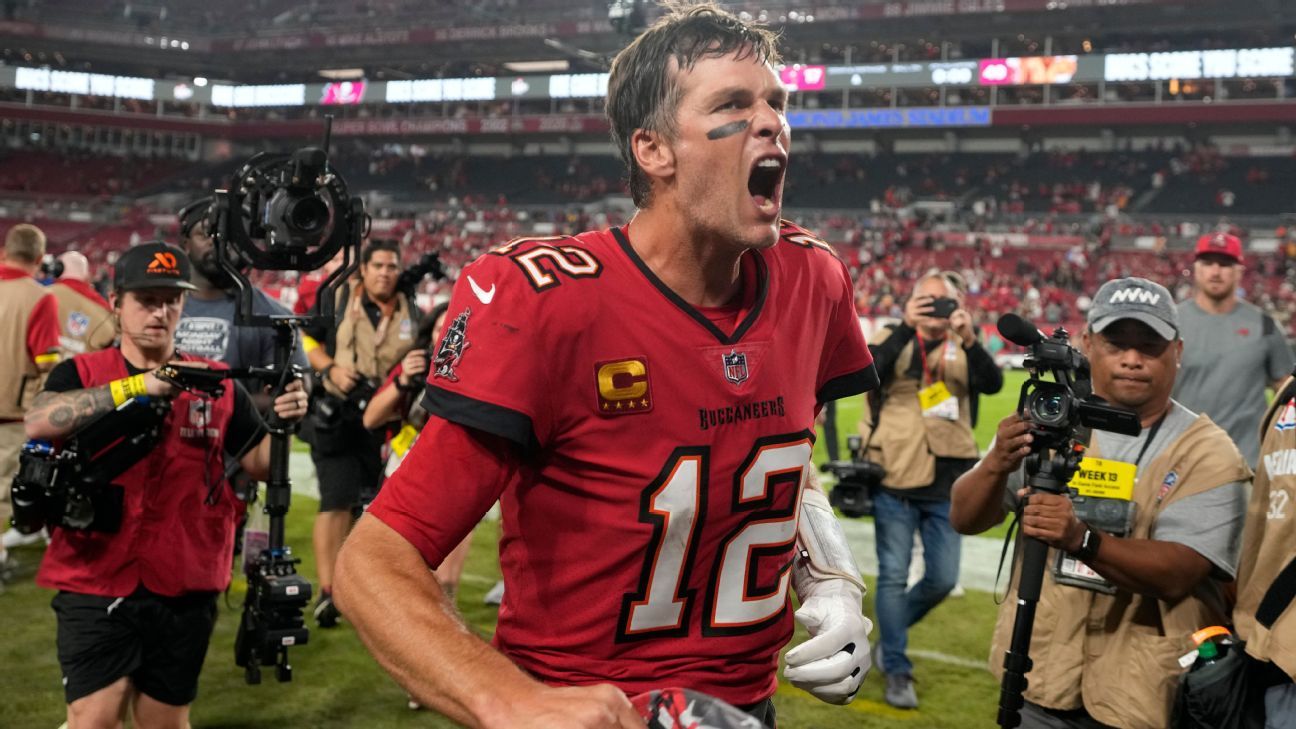 TAMPA, Fla. — Even Tampa Bay Buccaneers quarterback Tom Brady’s own daughter, Vivian, who turned 10 years old Monday, expressed skepticism that her father could defeat the New Orleans Saints at home on her birthday.

“She was a little worried when I said, ‘We’re playing the Saints,'” Brady told the ESPN broadcast. “She said, ‘I don’t know, Daddy.'”

He hadn’t done it in two previous tries at home and hadn’t even scored a touchdown in those games. And with the Bucs trailing 16-3 with 5:21 to go, it didn’t look like it was going to happen in 2022, either.

But the 45-year-old Brady, down yet another offensive lineman in All Pro right tackle Tristan Wirfs, threw two touchdowns to defeat the Saints 17-16, surpassing Peyton Manning for most career fourth-quarter comebacks in NFL history with 44.

The first, running no-huddle, came on a 91-yard drive that saw Brady complete passes to six different receiving targets and was punctuated by a 1-yard pass to rookie tight end Cade Otton in the corner of the end zone — the same corner he secured the Bucs’ come-from-behind victory over the Los Angeles Rams in Week 9.

Then after the defense forced a three-and-out with a sack for a 10-yard loss by outside linebacker Carl Nassib, Brady got the ball back with 2:29 to go. From there, he completed 8 of 10 passes, with a 6-yard touchdown to rookie running back Rachaad White, who dove over the goal line with 8 seconds remaining to give the Bucs their first sweep of the Saints since 2007.

“He gets better like in those moments. Like it’s crazy,” Evans said. “I think it’s experience and his mindset. He knows that at the end of the game, he wants the ball in the offense’s hands and he demands us to go out there and make plays.”

Said Otton: “It’s so obvious he has been there before. He gives us all the confidence to know that we can do it. That the biggest thing is the belief and the confidence at the end of the game that we are going to win this things.”

But only one other time had Brady actually been here before — when the New England Patriots overcame a 28-3 deficit, trailing by 19 points in the fourth quarter, to defeat the Atlanta Falcons 34-28 in Super Bowl LI. Monday night marked the first time during the regular season that Brady won after trailing by 13 or more points in the fourth quarter.

“It’s just amazing. I’ve just been grateful,” White said. “I believe I was just born when TB had first gotten into the league. I was born in ’99. Just to be able to be apart of that years later down the road, you just be grateful. And you’ve gotta cherish these moments.”

Just how improbable was the victory? Teams over the past five seasons are 3-530 when down 13+ points in the final four minutes of regulation, according to ESPN Stats & Information research, with the three wins being the Los Angeles Chargers at the Kansas City Chiefs in Week 15 in 2018 , the New York Jets at the Cleveland Browns in Week 2 this season, and now the Bucs over the Saints. The Bucs’ odds to win were as long as 25-1 at Caesars Sportsbook when the team trailed 16-3.

Even more improbable is that this was the second time this season that Brady has thrown a come-from-behind game-winning touchdown in the final 15 seconds of regulation. Brady’s touchdown to Otton against the Rams came with 13 seconds left. According to Elias, Brady is only the third quarterback since the merger to throw multiple go-ahead touchdowns in the final 15 seconds of regulation in a season, and he’s the first since Brett Favre in 1999.

“I’ve been a part of plenty of ’em,” said right guard Shaq Mason, who was part of the Super Bowl LI comeback when he was with the Patriots. “I had a feeling how it was gonna end, but it was great to see that through. … I mean, he’s the GOAT for a reason. He’s the greatest. I’m lucky to get a second chance to be with him . I love it. … Everybody in this locker room has confidence in him when this time comes. He delivered for us.”

Evans added: “One thing about us — especially the past few years with Tom — we just keep playing until the end because anything can happen. We’ve seen that time and time again.”