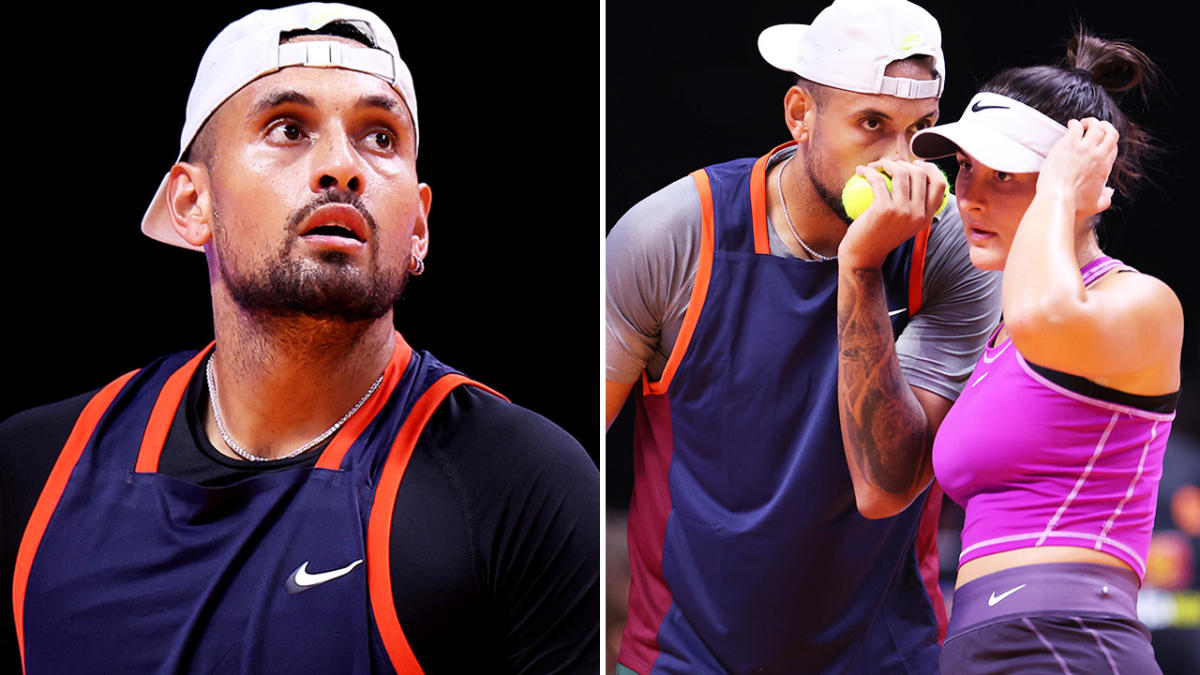 Nick Kyrgios has made the staggering revelation that he hopes he can win a grand slam in 2023 and retire from tennis. The controversial Aussie star had his best year to date in 2022, finishing with a 37-10 win-loss record on the ATP tour.

The only players with a higher win percentage in singles were Carlos Alcaraz, Rafa Nadal and Novak Djokovic. Kyrgios’ remarkable year was highlighted by a Fairytale run to the Wimbledon finalwhere he eventually lost to Djokovic.

But the World No.22 is hoping to go one better in 2023 and is eyeing off a maiden grand slam singles title. Speaking at the World Tennis League exhibition event in Dubai, Kyrgios was asked on the broadcast about his plans for 2023.

“Hopefully I can win a slam and just retire,” he said with a laugh. And while he might have been joking, there’s definitely some truth to the admission.

Speaking in the aftermath of his loss to Djokovic in the Wimbledon final in July, Kyrgios expressed similar sentiments. The 27-year-old suggested he might have walked away from the sport if he had won the title.

“I think every tennis player that picks up a racquet one day wants to win Wimbledon. I think Wimbledon is the biggest title ever,” Kyrgios said at the time. “I even had a chat with my team, that I thought if I won Wimbledon, I’d really struggled after that for motivation. I really don’t know what more I would have to prove as a tennis player.”

With the Australian Open less than a month away, there is the very real possibility that it might be Kyrgios’ last. “Would I sign again? Honestly, I don’t know about it,” he said in Dubai.

“It took a lot of hard work this season, a lot of discipline and it seems the better you do, everyone wants a bit more of you and it becomes more stressful. But I had a lot of fun this season. And I’m finally just proud to say I made a slam final and started to meet some expectations. I had a lot of fun, I enjoyed it, definitely felt better off and on the court.”

Kyrgios said he was enjoying the mixed teams format of the event in Dubai, while also expressing his joy that some of his family got to fly over from Australia to watch him. He said: “I’m a massive fan of the team environment, I think it’s pretty cool. It’s a good experience for the fans and the players, not many events where I can be seen next to Rohan Bopanna and Bianca Andreescu so it’s pretty cool, it gives tennis a bit of a different dynamic.

“Obviously coming from Australia I don’t have (family) with me often and I’m not going to spend Christmas in Australia, so they decided to come here and just spend a couple days here and enjoy it. We’re doing a couple things and my nephew is here, so it’s pretty exciting times.”

Kyrgios will play another team event in the inaugural United Cup before heading to the Adelaide International in January in preparation for the Australian Open. The United Cup will mark the first time Kyrgios has represented Australia in a team event since 2019.

Hey there controversially opted out of the Davis Cup for the last three years, while also deciding to skip the Tokyo Olympics in 2021. Davis Cup captain Lleyton Hewitt and star player Alex de Minaur made no secret of the fact they tried to get Kyrgios to play in this year’s finals, to no avail.

Speaking on Monday, Aussie Legend Pat Rafter said he’ll be as interested as every other tennis fan when Kyrgios teams up with Hewitt again for Australia’s United Cup ties against Great Britain and Spain from December 29 in Sydney. “He will have to work out how he goes about all that. I don’t really know what goes on with him,” Rafter told reporters in Brisbane.

“I just sit back and watch it, see what comes out and have a bit of a laugh. Because I am not involved in it and don’t need to be, I really enjoy sitting back now and not have to say or do anything .”

Rafter said he relished representing Australia in the Davis Cup, but admitted only time would tell if Kyrgios returned to the competition in 2023. “You’ve got to have the buy-in with the players and Lleyton as well,” he said.

Click here to sign up to our newsletter for all the latest and breaking stories from Australia and around the world.