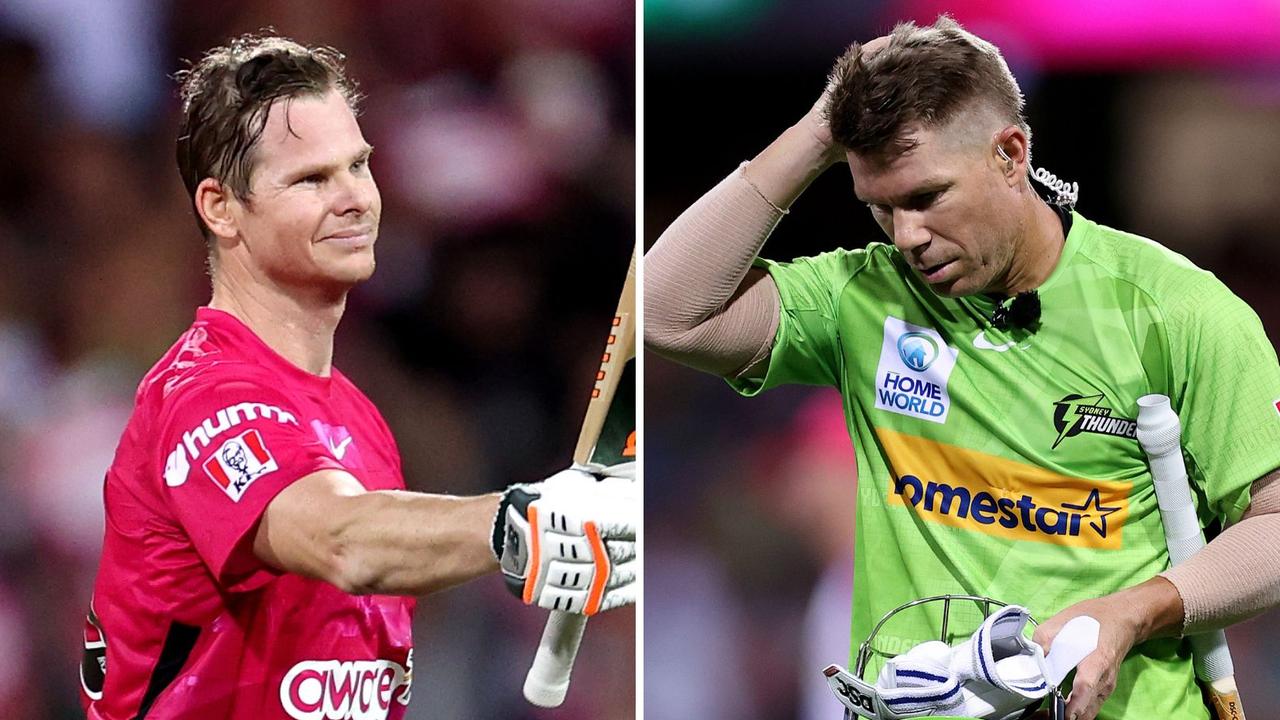 The New South Welshman has become the second cricketer to score consecutive centuries in the Big Bash League, racing towards triple figures in just 56 deliveries during Saturday evening’s emphatic 125-run victory over the Sydney Thunder.

Smith smacked an unbeaten 125 (66) at the SCG, the fifth-highest score in BBL history, backing up the century he scored against the Adelaide Strikers at Coffs Harbour earlier this week.

“To think we wouldn’t let him play last year.

“That was incredible. Some of those shots, I was standing up the other end just gobsmacked.”

The Sixers ultimately mustered 2-187 from their 19 overs in the rain-affected contest, with Henriques contributing a crucial 45 not out at the other end.

The men in lime green came nowhere near chasing the target, bowled out for just 62, the club’s second-lowest total in BBL history, to heavily damage their net run rate.

Superstar opener David Warner top-scored with an unconvincing 16 (23), with only one other Thunder teammate reaching double figures.

Watch BBL12. Every game live and ad-break free during play on Kayo. New to Kayo? Start your free trial now >

After the Sixers won the toss and elected to bat first, Thunder seamer Gurinder Sandhu snared an early breakthrough after rival wicketkeeper Josh Philippe edged a delivery back onto his stumps for 10 (8).

Later that same over, Ben Cutting put down a chance at cover to give Kurtis Patterson an extra life on 2, but he couldn’t make the most of the reprieve, top-edging a short delivery a couple of deliveries later, caught by wicketkeeper Matthew Gilkes.

Pakistan spinner Usman Qadir copped a nasty blow on the thumb in the seventh over, forced off the ground in agony.

Smith and Henriques then combined for an unbeaten 155-run partnership for the third wicket to put the hosts in a commanding position.

Henriques initially struggled to find the boundary rope, but Smith went ballistic at the other end, clearing the fence on nine occasions.

The 33-year-old reached triple figures in the 17th over with an almighty heave over the long-on boundary, bringing the 38,757 Sydney spectators to their feet.

“The man is an absolute superstar, in front of an adoring SCG audience,” Fox Cricket commentator Mark Howard said.

“What a knock, what a player.”

“He’s turned into the Hulk tonight.”

The run chase started poorly, with Gilkes departing in the second over for 1 (4) after trying to slap Sean Abbott over the mid-off fielder, instead gifting a regulation catch to Jordan Silk on the inner ring.

Blake Nikitaras, in his maiden BBL knock, scratched his way towards 8 (12) before miscuing a lofted drive while facing Ben Dwarshuis, caught at cover by Henriques.

Veteran tweaker Steve O’Keefe was brought into the attack and immediately had an impact, dismissing Thunder young gun Ollie Davies for 2 (3) after feathering a catch through to Philippe with the gloves.

Warner struggled to find the middle of his bat on Saturday, eventually falling victim to O’Keefe, who also sent Daniel Sams packing cheaply later that over.

The 38-year-old wasn’t done there, removing Ben Cutting for 6 (9) for his fourth scalp of the evening as the Thunder crumbled to 7-48.

“This has been a bloodbath, hasn’t it?” former Australian bowler Brett Lee said on Fox Cricket.

“This is an absolute belting at the SCG,” Howard declared.

Abbott finished the game in emphatic style, removing Thunder tailenders Sandhu and Qadir each for a duck to roll the cross-town rivals within 15 overs — the 125-run loss was the fifth-largest margin of defeat in BBL history.

O’Keefe finished with career-best figures of 4-10 from three overs.

Earlier on Saturday, Sixers all-rounder Daniel Christian announced his retirementwith the current Big Bash tournament set to be his last.