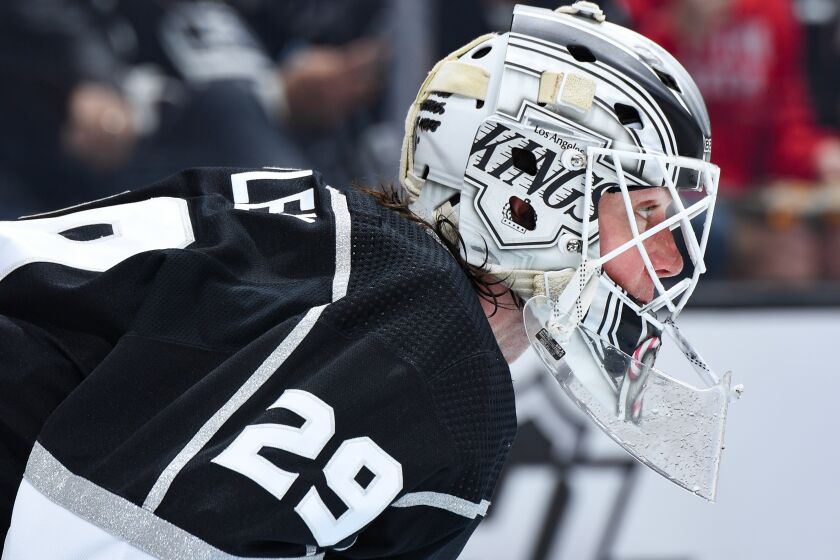 the kings have a goaltending problem.

Phoenix Copley saved their season by winning 12 of 14 decisions following his Dec. 1 promotion from the American Hockey League, putting up numbers that were about average for an NHL goalie but looked like precious gems to the Kings, who had stayed afloat while Cal Petersen flailed his way to a emotion other Jonathan Quick showed signs of age and persistent shakeness.

The entire team played better in front of Copley than it had played in front of Quick, probably subconsciously, and their diligence reduced the danger of the shots Copley had to face. Copley was never going to be the long-term answer in net, but his teammates rallied around the career minor-leaguer who came out of nowhere to supplant two-time Stanley Cup champion Quick and gave them respectable goaltending when they most needed it.

That happy bubble burst on Thursday. Copley gave up a flurry of soft goals and was replaced by Quick in the second period of a 4-0 loss to the Dallas Stars in the Kings’ final home game before a six-game trip that begins Saturday in Nashville.

Copley yielded four goals on 17 shots, the last goal — a wraparound by former Junior King Jason Robertson of Arcadia scored at 7:27 of the second period — being enough to persuade coach Todd McLellan to yank him. Quick stopped all seven shots he faced. But that included only two shots in the third period while Dallas, which had blown a three-goal lead at San Jose on Wednesday, made sure recent history wouldn’t repeat itself.

McLellan had considered switching goalies after the Stars scored three times in the first period, but he wanted Copley to get more ice time in the goalie’s first game in eight days, which also was the team’s first game after a four-day break. That fourth goal, celebrated exuberantly by Robertson’s extended family in a suite high above the ice, was the breaking point for the Kings, who were shut out for the third time this season and first time at Crypto.com Arena. They won’t play at home again until Feb. 11 because they must vacate the arena for the Grammys and then have the NHL All-Star break and a week off.

They’re still third in the Pacific division and only two points behind leader Seattle. But they’re also only one point ahead of Edmonton, which holds the first West wild-card spot. And the Kings’ goal differential dropped to minus-seven, which could come into play to break a tie in the standings and determine who makes the playoffs, or who ends up in which playoff position.

“Do we have a goaltending problem?” McLellan said, repeating a reporter’s question. “We have goaltending moments but we have [defense] moments and forward moments that don’t go our way.

“Pheonix obviously has played well for us lately. It wasn’t his best night. Maybe his poorest that he’s had with us.”

Copley, to his credit, acknowledged his shortcomings. Rust from inactivity, he said, wasn’t to blame. “Just a tough effort by me. I guess it’s always a little tough but that’s no excuse,” he said.

His teammates didn’t help much, making an array of small mistakes that added up. “We self-inflicted our own misery early in the game and tried to find our game as the game wore on,” McLellan said.

They lost battles. Didn’t win crucial faceoffs. Didn’t get the puck in deep, which led to Tyler Seguin’s goal from above the right circle at 6:54 of the first period. Seguin went top shelf for an unassisted goal at 17:20, and Esa Lindell found the upper-left corner at 18:44 to silence the crowd and give the Stars a 3-0 lead.

“Maybe things weren’t clicking as well as they have been, but the effort was there,” Copley said. “It was just the execution.”

The Kings didn’t consistently match the Stars’ intensity. “It was just a bounce here and there that we needed. And we didn’t quite earn it tonight, too,” Kings captain Anze Kopitar said. “We definitely have to play better in order to win games.”

Seeking silver linings, McLellan said he considered Quick’s relief effort some consolation. “Quickie played well. He didn’t get a lot of action but he was in the game, he made some good puckhandling touches, and some stops right off the bat on the penalty kill,” McLellan said. “If there’s a positive, he got some good minutes in and can feel good about himself.”

The Kings’ upcoming six-game, 12-day trip is oddly structured, with games at Nashville, Chicago and Philadelphia in the first four days. They’ll have two days off before playing back-to-back games at Florida on Jan. 27 and at Tampa on Jan. 28, and they’ll finish at Carolina on Jan. 31. That will require some careful scheduling of their goalies .

“Common sense is that we can’t run one guy there. We know that,” McLellan said. “So, they’re both going to get to play in those situations. And then after that we’ll have more time. we get rest We get practice. We’ll see where the team is at.”

They won’t go far if they don’t resolve their goaltending problem.