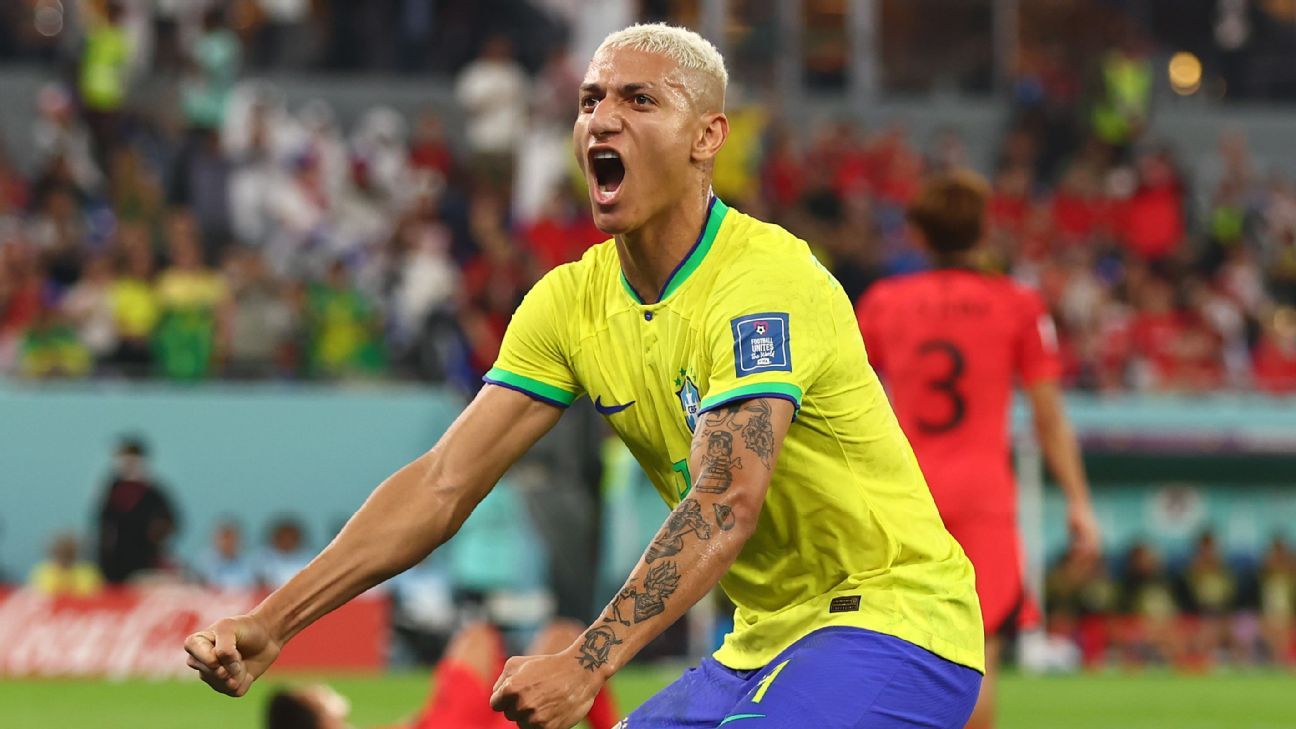 Richarlison led them all — including coach Tite — in a version of his trademark “pigeon dance” in celebration of his first-half goal in Brazil’s 4-1 dismantling of South Korea on Monday. And so far at the World Cup he has been leading opposing defenders in a merry dance as he provides Brazil’s cutting edge.

The Tottenham Hotspur striker has become a national hero, both for his performances on the field and for his charisma and compassion off it. Richarlison backs a number of social causes — anti-racism and poverty, environmental issues and others — with both his mouth and his wallet.

For many Brazilians, Richarlison is proving a popular reference point. He is a pigeon with a message to carry. It is perhaps no surprise that the striker is enjoying the World Cup; the big occasion suits him. He has a goal poacher’s sense of opportunity, which will be needed against Croatia on Friday in a crucial quarterfinal.

Brazil were seeking to rebuild after going out of the last World Cup in the quarterfinals. Richarlison was not initially part of Tite’s post-Russia 2018 plans and was not initially included in the squad ahead of a friendly match against the United States in September 2018. But another player, centre-forward Pedro, was forced out through injury, and Richarlison received a late call up. He came on for the last few minutes of the 2-0 win at MetLife Stadium in East Rutherford, New Jersey.

A few days later he was given a start against El Salvador outside of Washington; Richarlison bashed in two goals and forced his way into contention. The chance had appeared and he had taken it.

Playing for his country is an obsession and Richarlison says that he trains imagining that he is playing a World Cup game against Argentina — something that may well come true should both advance to the semifinals. Last year he played in both the Copa America and in the Tokyo Olympics, but he paid a price. His fitness suffered and Brazil were building for Qatar with the idea that he would not be in the starting XI.

A pair of top-class wingers had appeared in Raphinha other Vinicius Jr. Raphinha secured a €60m move from Leeds United to Barcelona while taking to international football as if he had been there all his life; Vinicius took longer to adapt, but had already become a global star with Real Madrid and his quality was not in doubt. Title was imagining a team with the two wingers and neymar in between them as a false no. 9.

But, as the coach is fond of saying, the field speaks — and, with form and fitness recuperated, Richarlison once more made use of the slightest chance to stake his claim.

The key moment came in two friends against South Korea and Japan in June. Richarlison started against South Korea, scoring and looking sharp as Brazil won 5-1. A few days later they went to Japan and began in what — until that point — was Tite’s preferred line-up, with two wingers plus Neymar as a false no. 9. They struggled to break the Japanese down. On came Richarlison for the last 20 minutes and the game changed. He won the penalty that brought about the only goal of the game and Brazil’s coaching staff retreated for earnest debate.

Title was still keen on persevering without a centre-forward, but no-one else agreed and he ceded to the majority. Brazil were going to play with a genuine No. 9, and Richarlison was the man.

Although Gabriel Jesus (whose World Cup campaign has now ended due to knee surgery that will sideline him three months) was seen as the obvious choice thanks to his strong start with Arsenal, Richarlison supplies the presence in the penalty area that the coach is looking for. Since Richarlison’s return to the national team, he’s scored seven goals in six games.

With two wingers plus Neymar and Lucas Paqueta, Brazil have plenty of men setting up the play. Richarlison is not there to elaborate, he is there to put the ball in the back of the net.

The striker is Brazil’s last line of attack, but he is also their first line of defence. This is a Brazil side that presses with an intensity that none of their predecessors can match. And he is the leader of the pack, the first to put opposing defenders under pressure as they try to play out from the back. Two of the goals against South Korea — including his own — started from his own hard work in winning back the ball.

From not being part of the projected side a few months ago, he is now one of its symbols. In Tokyo when the Olympic gold medals were being handed out, Richarlison, with typical irreverence, spoke to FIFA president Gianni Infantino. His words — “see you next year in Qatar, baldie.”

The pigeon was delivering a message that he expects to be on the podium on Dec. 18, celebrating Brazil’s sixth World Cup win.