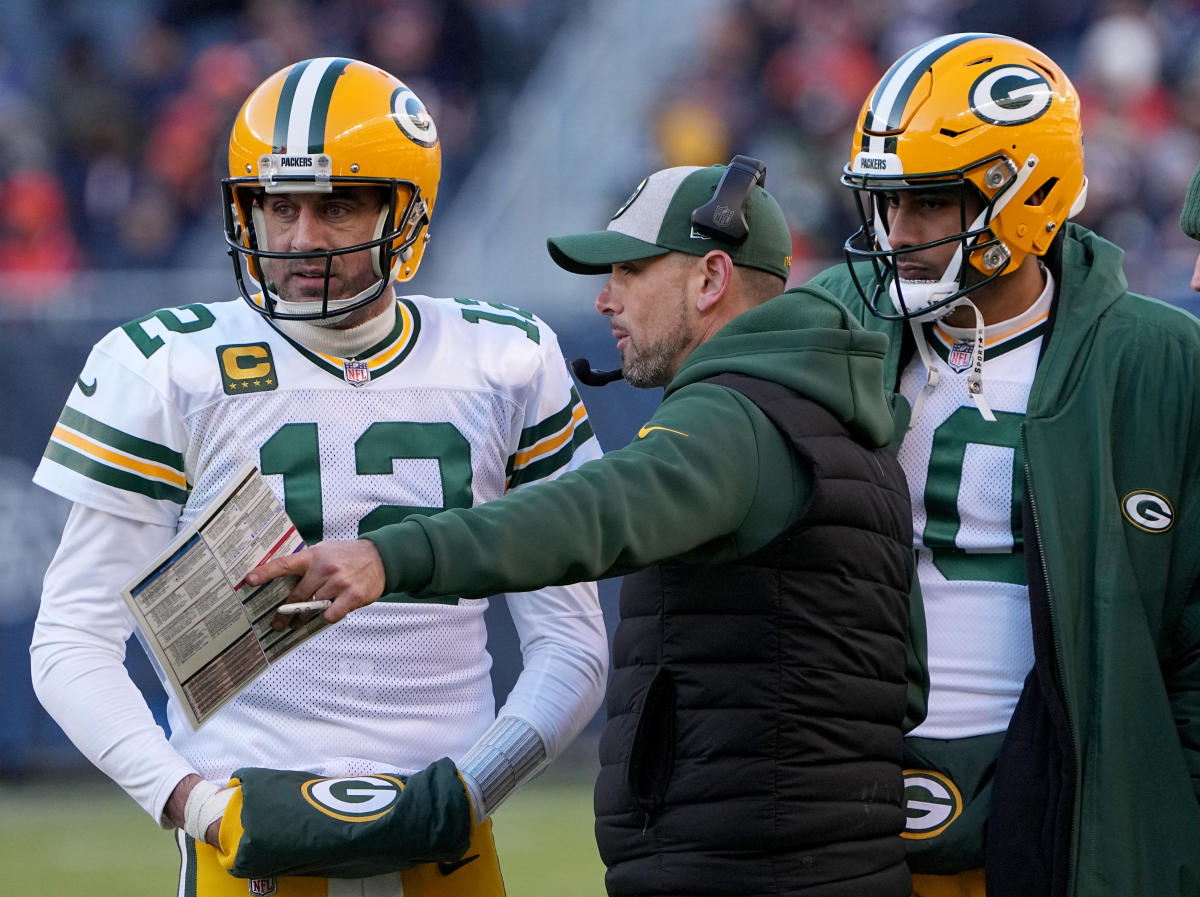 With the playoffs little more than a pipe dream for the Packersthe conversation around Green Bay has shifted to the future — most notably, at quarterback.

Head coach Matt LaFleur and general manager Brian Gutekunst each addressed the position on Monday as the team navigates what can be charitably described as a murky situation. On one hand, they have an aging future Hall of Famer on the decline. On the other, there’s a third-year former first-round pick who’s yet to see significant live NFL action and could use the reps. What’s an NFL franchise to do — in the short term and during the offseason?

For now, walk a tightrope. LaFleur and Gutekunst took turns on Monday addressing the team’s plans regarding Aaron Rodgers other Jordan Love. Neither was ready to offer clarity on a path forward while taking care to remain effusive of both quarterbacks.

When asked at his news conference whether he wanted Rodgers back next season, LaFleur didn’t balk.

“Yeah, absolutely,” LaFleur said. “Of course. You guys know how I feel.”

He then deflected to the task at hand — the Los Angeles Rams in Week 14 — before reiterating that he’d “absolutely” welcome Rodgers back.

“I have a hard time looking past the LA Rams right now,” LaFleur continued. … “So that’s where my mind is right now. But yeah, absolutely.”

As for how to manage Rodgers and Love in the same quarterback room, LaFleur apparently doesn’t subscribe to the theory that having two quarterbacks is one too many.

“I think we’ve got a great problem in terms of when you have confidence in multiple people,” he continued. “You’d rather have that.”

Is playing Rodgers a mistake?

Rodgers returned to the lineup on Sunday against the Chicago Bears after leaving week 12’s loss to the Philly Eagles with a rib injury. Sunday’s wasn’t a vintage Rodgers effort, but it was effective enough. He threw for 182 yards and a touchdown without a turnover as the Packers rallied to a 28-19 win. The win kept their waning postseason hopes alive at 5-8.

Whether attributable to injuries to his ribs and thumb, being a 39-year-old NFL player or — the more likely scenario — a combination of both, Rodgers has been a shell of his back-to-back MVP himself while posting a career- low passer rating and throwing more interceptions (9) through Week 13 than he has since the 2010 season.

Love, meanwhile, impressed in his limited relief action in Week 12 against the Eagles. hey connected with breakout rookie Christian Watson for a 63-yard touchdown pass and finished the day completing 6 of 9 passes for 113 yards with the score. He was confident and decisive in the pocket while his passes were on target. It was a short run, but he looked very much like a starting NFL quarterback.

With the season’s hopes waning and Rodgers banged up, the effort prompted calls for the Packers to bench Rodgers and actually see what they’ve got in love during the final third of the season. They provided their answer to that call with Rodgers’ return on Sunday. And it sounds like that’s the path moving forward, even if the Packers are mathematically eliminated from the playoffs.

What about Green Bay’s $20 million option on Love?

As for Love, the Packers have a decision to make on whether to exercise the fifth-year option on his rookie contract. It’s a bill due in the offseason that would carry a roughly $20 million price tag for 2024 if the Packers opt in.

Love, meanwhile, has made a total of one professional start and thrown 80 NFL passes since the Packers drafted him in 2020. That’s apparently enough for Gutekunst to decide on the option.

Gutekunst said on Monday that he’s seen enough of love in practice and on the playing field to make a decision. But he stopped short of actually stating what that decision will be. He instead said that the Packers are “very pleased with his progression” and that he’s confident that Love’s a starting-caliber NFL quarterback.

“I do,” Gutekunst said when asked if he believes that Love’s an NFL starter.

That sounds like the Packers intend to exercise the option. They did, after all, spend a first-round pick to select Love. But for now, Gutekunst is keeping things vague. The same goes for his thoughts on Rodgers’ future, a subject he described as “an off-season kind of decision.”

“But surely, yeah, we want all our guys back,” Gutekunst said when discussing Rodgers. “We made a big commitment to him this offseason, so that was important.”

To be fair, it is an off-season decision. And it might not even be the Packers’. It certainly won’t be theirs alone as Rodgers ponders his own bevy of options that include retirement, a trade demand or a commitment to return.

But decisions now impact the clarity of decisions in the offseason, which will see the Packers at a quarterback crossroads. At that point, a murky outlook that leads to both quarterbacks returning would be a recipe for chaos.