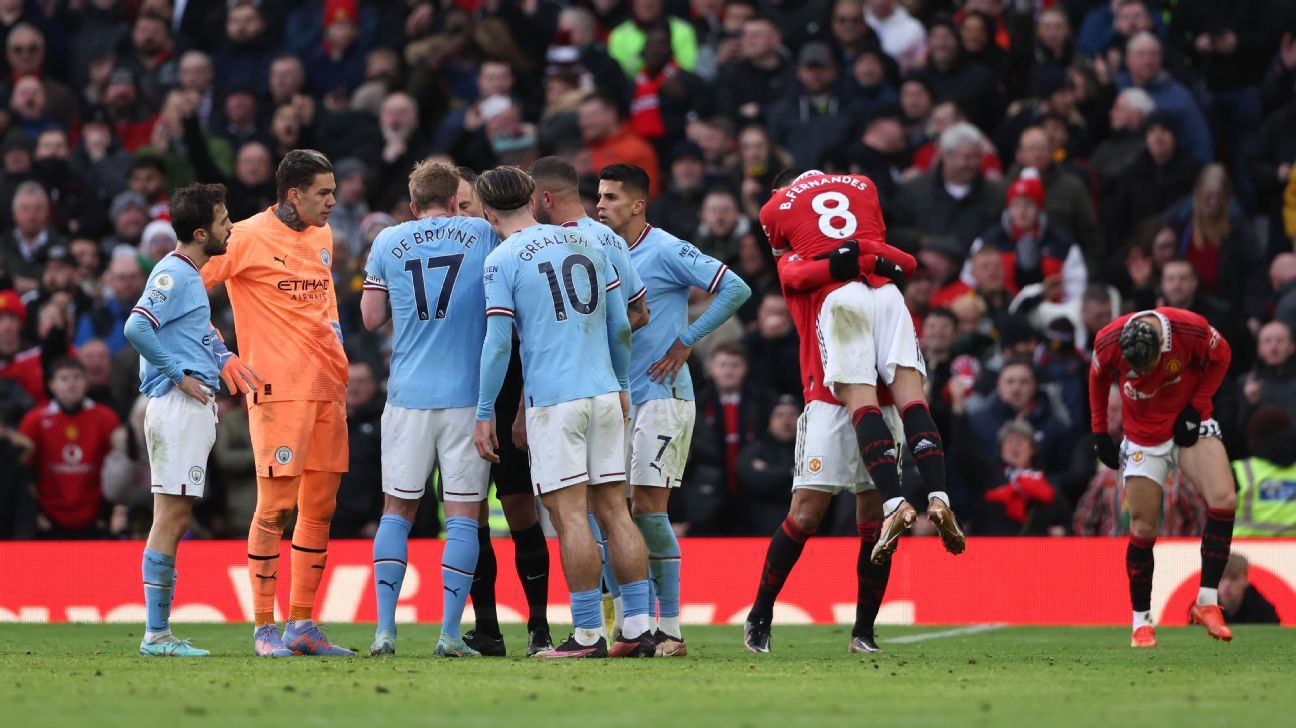 MANCHESTER– Marcus Rashford scored in a seventh successive game as Manchester United overturned a 1-0 deficit to beat champions Manchester City 2-1, but it was a controversial turnaround in the Manchester derby at Old Trafford.

After a cagey first helped, Jack Grealish‘s opener looked to have set City on course for a Premier League win against United.

but Bruno Fernandes‘ equaliser — tucking home with Rashford clearly offside next to him — leveled the scores and Rashford’s winner four minutes later then sealed a huge win for the home side. But the dust will not settle on this one for some time.

1. United in the title race after controversial win over City

Man United are now in the Premier League title race after fighting back from a goal down against City to move within six points of leaders Arsenal — who they play a week on Sunday at the Emirates.

In one of the most dramatic Manchester derbies in recent times, United’s failure to capitalize on a number of first-half chances looked to have cost them dearly when substitute Grealish headed City into the lead from a Kevin De Bruyne cross on 60 minutes.

But a controversial equalizer by Fernandes on 78 minutes put United back in the game and sparked anger within the City ranks. With Rashford clearly offside when the ball was played down the middle, the United forward charged through but left the ball for Fernandes to score from 20 yards and the offside flag was raised. But referee Stuart Attwell overruled his assistant because Rashford, while appearing to interfere with play next to his teammate, did not actually touch the ball.

Four minutes later, Rashford then added insult to injury as he took his post-World Cup tally to eight goals in seven games by scoring the winner from close range.

It was an incredible finish and, after holding out to win the game, United now move to within a point of champions City, while Erik ten Hag’s team know that a win at the Emirates next week will put them firmly in the title race. United are the only team to beat Arsenal this season, winning 3-2 at Old Trafford earlier in the campaign.

Having lost 6-3 at City in October, United bounced back impressively under Ten Hag and this performance was a sign of their incredible progress under the former Ajax coach.

In turn, City’s defeat highlighted concerns for Pep Guardiola’s team. This was their second straight loss following a shock Carabao Cup defeat at Southampton in midweek and they now face a battle to avoid finishing below United in the league for the first time since 2013.

Manchester City have an incredible array of attacking talent, but Guardiola will be concerned about their lack of a cutting edge away from home. It costs them the points in this game.

Grealish’s header against United was only City’s sixth goal in their last eight games in all competitions and half of those came in a 3-1 win at Leeds last month.

One theory in the game about City’s comparative bluntness away from home is that teams have worked out that most of the threat comes from Erling Haaland, so the objective becomes all about stopping the Norway international and cutting off his supply line. And that approach has worked. Haaland scored twice against Leeds at Elland Road, but those goals were his first away from home since September.

The former Borussia Dortmund forward was quiet against United to the point of being anonymous. And although United were always wary of the threat he posed, they knew that City didn’t attack in the same wave-after-wave fashion that they once did under Guardiola.

The breakthrough only came when Kevin De Bruyne burst into the penalty area and crossed to the far post for Grealish to score on 60 minutes.

If City are to catch Arsenal at the top of the table, they will have to sharpen up and score more goals away from home because they are in danger of losing touch at the top.

3. Martial running out of chances at United

Anthony Martial lasted just 45 minutes of this game and it’s fair to say that the United forward will not have too much to look back on when he remembers this derby.

The 27-year-old started as a lone striker in a 4-2-3-1 formation and contributed nothing beyond straying offside too often and angering the home supporters when he failed to press City goalkeeper Ederson when the Brazil international was allowed time and space to clear the ball.

Martial has been one of the great survivors at United since arriving from Monaco in August 2015, but many would suggest he is still living off the memories of a stunning debut goal against Liverpool a month later.

Since then, he has been a frustrating performer, consistently failing to live up to his potential and both Jose Mourinho and Ole Gunnar Solskjaer tried and failed to offload him during their spells as United manager.

Martial is now in his eighth season at Old Trafford, but his performance against City underlined the belief that his days are now numbered under Erik ten Hag.

The loan signing of Wout Weghorst will put pressure on Martial for his place in the team, while in the long-term, United are already planning to sign a world-class centre-forward in the summer. But with just three league goals so far this season, it is clear the martial isn’t up to requirements at United and his wonderful performance against City proved it.

BEST: Tyrell Malacia — The United left-back showed tenacity all game and he stood up well to the challenge of marking Riyadh Mahrez.

BEST: Bruno Fernandes — The United captain showed real leadership qualities and inspired the fightback with the opening goal. How long before he gets the captaincy full-time?

BEST: Kevin De Bruyne — A cagey game needed a moment of quality and De Bruyne delivered with a great run and pinpoint cross for Grealish to head in the opener for City.

WORST: Anthony Martial — Was off the pace, offside, or both. Not good enough for a team in the top four.

WORST: Phil Foden — The City forward scored a hat trick against United at the Etihad earlier this season, but he barely touched the ball at Old Trafford.

WORST: Erling Haaland — No goals and no impact from the city striker. Now three games without a goal, which is his worst run of the season.

Grealish arrived off the bench in the 56th minute and scored in the 59th.

Should Manchester United’s goal have been allowed?

Marcus Rashford was in an offside position but didn’t touch the ball. #MyPLMorning | #MUNMCI pic.twitter.com/OLOQHVZdP9

MARCUS RASHFORD CAN’T STOP SCORING AND MANCHESTER UNITED HAVE STORMED BACK TO TAKE THE LEAD!

After the match: What the players/managers said

On Rashford recovering from injury: “Players have to be resilient. You get kicked in a game. It happened and it hurts but you have to keep going. You have to do it to get the right result and performance. Deal with the painful moment and the game will go on. In top football you have to suffer and sacrifice to get the right result. The belief is back and we’re in a good direction. You have to work out of possession [against teams like City]. They have qualities in split moments to score goals. We saw that today. One mistake and they scored.”

Manchester City boss Pep Guardiola to BBC Match of the Day: “Marcus Rashford is offside, Bruno Fernandes is not. Rashford distracted our keeper and center defenders. It is what it is. We know where we play. It is difficult for the referees in these stadiums.”

On the game: “Congratulations to United. People will understand how nice Manchester City is. It was a fantastic game. We controlled the transitions better in the second half against Rashford and their fast players. We had the right spirit to do it. We were close and we have to improve when we concede the goal, be more stable, the gap between the first and second goal is too close. In general I have no regrets. I don’t care if we don’t win the Carabao Cup or the Premier League , we’ll try. I don’t care when a team performs how we play. It was quite similar to the many, many years we’ve been here. There are plenty of points to play for and we have to play there. In every game we have to perform. We always play in these sort of games and in others we struggled a little bit.”

– This was the 189th edition of the Manchester Derby in all competitions: Manchester United lead the series 78-58-53 (WLD) now.

– Grealish scored his second career goal in a Premier League game against Manchester United. His first was on Dec. 1, 2019 when he played for Aston Villa.

– Kevin De Bruyne registered his 10th assist this season in Premier League. He joins Lionel Messi and Neymar (PSG) as the only players from the Europe’s top 5 Leagues with 10+ assists this season (only league play).

– Marcus Rashford tied Manchester United’s club record for most consecutive home scoring games with Dennis Viollet, who achieved the feat from August to December in 1959.

– Manchester United have two goals both coming after the 75th minute. They now lead the Premier League in most goals scored between the 76th-90th minute.

Man United: An away trip to Crystal Palace comes on Jan 18, before they travel to league leaders Arsenal on Jan 22.

Man City: Three homes games in a row follow, with Tottenham Hotspur (Jan 19) and Wolves (Jan 22) in the Premier League, then Arsenal in the FA Cup on Jan 27.