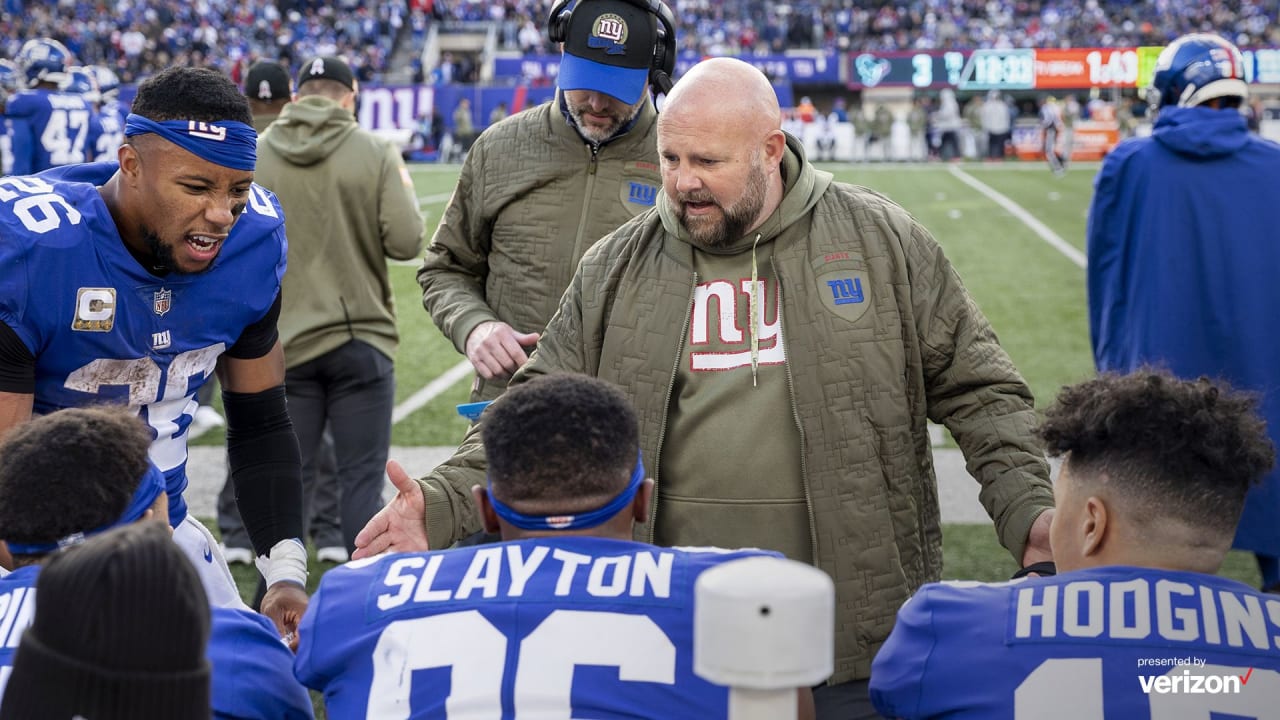 Q: Tough loss last week in Minnesota. Do you take any solace in the fact that you were down 10-0, you came back to take the lead? You fell behind again and tied the score late. You showed some mental toughness, and you rallied a couple of times.

Daboll: “I’d say we’ve been in a lot of these games that are fairly close. Things swayed back and forth. Again, our philosophy is, ‘Compete for 60 minutes, regardless of the score or the situation. And just Focus on the next play.'”

Q: Daniel Jones completed a career-high 30 passes and threw for a season-high 334 yards. He threw some deep passes, which we haven’t seen a lot of. But he threw the interception in the fourth quarter. How does that factor into how you evaluate how Daniel played?

Daboll: “I think it’s the same each week. You just go through each play for each particular player, regardless of the position. You evaluate the fundamentals and techniques, and then you evaluate – whether it’s decision-making, the production. Daniel’s done a good job for us all year.”

Q: Was it good to see him throw the ball down the field and complete a couple of long ones for a change?

Daboll: “Yeah. I think the biggest thing, and we’ve preached it since we’ve been here, is just ‘Make the right decision.’ If the right decision is to throw it down the field, then we throw it down the field.If the right decision is to throw it on a 12-yard route, then throw it on a 12-yard route.If it’s a check down , if it’s use your legs, if it’s throw it away, (then do that).That’s playing quarterback in this league – decision-making.There are a few plays here or there that will be really clean, and you’ll be able But a lot of them are muddy – whether that’s a coverage disguise, whether it’s pressure in the pocket, whether you’ve got to move a little bit.So, it’s making good decisions under pressure, not just in the fourth quarter, but as the game goes along – whether that’s a pressure by a linebacker, pressure by a defensive lineman, just tight coverage and you’re kind of waiting for things to happen number one requirement is ‘Make the right decision.’ So, he’s done a good job for us with that.”

Q: When the season began, no one would’ve anticipated that your three-leading wideouts would be Richie James, Darius Slayton and Isaiah Hodgins, especially since Hodgins was two months away from even joining the team. And now, they have 123 catches and eight touchdowns. Can you talk about their production as a group? But also, just again, the unpredictably of the NFL and how you didn’t know they’d be the guys you turned to.

Daboll: “You never know when you will get your opportunity. And those guys, I think, have made the most of their opportunities. They’re smart. They’re tough. They’re dependable. They know what to do. I think the quarterback has a lot of trust in them, and the passing game is always a work in progress, so the longer you can stay together, the more you throw, the more the receiver can see it through the quarterback’s eyes “Can read the body language of the receiver. All those things are critical in it. It takes a lot of time, a lot of reps. And those guys have done a good job of doing all the extra things that they can do to try to.” put themselves in a good position and improve our passing game.”

Q: There’s no obvious number one receiver. And last week, you played an opponent in (Minnesota’s Justin) Jefferson that leads the league in receptions and yards. You’ve been on teams that have had (number ones, like in Buffalo with) Stefon Diggs. Does it make a difference if you have the go-to guy or if you spread it around?

Daboll: “I think the most important thing is doing your job. I was a receiver coach (at the New England Patriots from 2002-2006) for a while when I started. And we had a bunch of guys that were very dependable, knew how to get open, could do those things on a consistent basis. There’s a lot of different ways to win games. And the biggest thing is that all the guys that are out there – the five eligibles – are doing the right thing on a consistent Base.”

Q: In Minnesota, you had three players (Hodgins, James and Saquon Barkley) with eight catches for the first time in Giants history.

Q: Saquon had a four-game stretch in which he totaled 216 scrimmage yards. He had 253 in the last two games. He seems to be running with the explosiveness that he had early in the year. Would you agree with that?

Q: This is a copycat league. You had a point blocked last week. It’s safe to say the Colts and everyone else is going to look at how it happened and try it themselves. Is that something you’ve got to shore up?

Daboll: “Absolutely. So, once one of those happens, you expect to see it again and again. But we worked hard on it this week, and we need to do a good job in that area.”

Q: Did you look at your roster yesterday and say, “What we need is a couple of guys named Davis?” You signed (linebacker) Jarrad Davis and (guard) Wyatt Davis.

Daboll: “(Laughs) I think (general manager) Joe (Schoen) and the scouting staff do a great job just staying on top of other teams’ practice squads, guys out there that we need to work out. They do a fantastic job . So, whatever we think can help our team, that’s what we’re going to try to do.”

Q: When you bring a guy late in the year, do you do so with a specific role in mind?

Q: Not just a position, but with Jarrad Davis, is there something in particular he does well?

Daboll: “I think we evaluate the players just like we do – whether it’s the draft, whether it’s free agency that comes up. If there’s someone we think can help our team, we bring them on. We try to get them up to speed and put them in our systems. You never truly know until they’re in your offense or defense and they’re hearing the plays. We just try to get them acclimated as quickly as we can.”

Q: I can give you any number of statistics to show that the Colts are struggling. You’re the head coach of the team that’s going to play them, so you’re going to tell me how good they are.

Q: As you watch the progression of tape this season, did they change much clearly since Saturday took over?

Daboll: “I think that’s pretty hard to do. Are there certain things here or there? Yes. But I think most of the league, as you see who you’re playing, you try to do the things that you think are going to work against them and go out there and execute them. But (Indianapolis quarterback Sam) Ehlinger has played in a couple of games – the Washington game, the Patriots game. (Matt) Ryan has played, and now (Nick) Foles has played. You go back, and you watch some of the things that Foles has done well in his career. You got to go out there and play a good game of football to give yourself a chance in this league.”

Q: Foles hadn’t even practiced with the Colts’ offense this season until he was named the starter. Now that he’s knocked the rust off, he should be a little better this week.

Daboll: “The passing game is about consistency, the best you can get it, and throwing with the players that you’re going to play with and seeing it through the same set of eyes. So, I can’t say how they’ “Re doing things or not doing things. I’ll just say he’s played a long time in this league. We expect everybody’s best.”

Q: You’ve played a lot of good defensive fronts this season. The Colts’ front is right up there. They have 43 sacks. And they’ve got (defensive end) Yannick Ngakoue, (defensive tackle DeForest) Buckner, (nose tackle Grover) Stewart.

Daboll: “Their defense is really good. (Defensive coordinator) Coach (Gus) Bradley has done it a long time. They play fast. I thought they played a really good game against LA the other night. Again, a few plays here, “There. They convert on a fourth-and-one. You do a few things that game, and that game is probably going to come right down to the wire. You watch the game earlier in the season, they played Kansas City. They won.” 20-17 The game comes down to seven seconds left. (Colts cornerback Stephon) Gilmore bats it up; they intercept it. They win that game. So, the margin for error in this league is very, very, very small.”

Daboll: “I do. He’s a good player. He’s got quickness. He’s a good-sized back. He runs with power. He can get the edge on you. He can make one-cut runs. He’s efficient, effective in the passing game. He was good for us when I was there.”

Q: They lead the league in kickoff return average (28.4 yards). Last week you had six touchbacks, but that won’t happen on New Year’s Day in New Jersey.

Daboll: “Well, they bring it out. He (returner Dallis Flowers) doesn’t take a knee very often. So, whether we kick it eight yards deep, or it goes a yard deep, most of the time he’s going to bring it out and return it. So, that’s something that we’ve put an emphasis on and really worked hard at this week.

Q: And you coached (Colts special teams coordinator) Bubba (Ventrone) as a player (at the Patriots when he was a safety), correct? And then, you were on the staff with him, too.

Daboll: “I did. He’s a very good coach. He was a tough player. Most of it was on special teams, but he did have a role on defense. He also was in the receiver room a little bit. Very smart player. He’s done a heck of a job here (at the Colts) with (special) teams.”