IN AN IRISH boxing story for the ages, Éireann Nugent has guaranteed at least a bronze medal at the Commonwealth Games after shocking England’s Jodie Wilkinson in what was Nugent’s first competitive bout in 11 years.

The Belfast woman, daughter of former Irish professional champion Ciarán Healy and a granddaughter of the great Immaculata BC coach Gerry ‘Nugget’ Nugent, lost the opening round on all five judges’ scorecards before grinding her way into the ascendancy over the next two with a relentless body attack and sheer force of will.

However, her victory this evening was only a microcosm of a far greater comeback: Nugent drifted away from boxing in 2011, aged 18, with work and general life getting in the way. A decade later, last summer, she was inspired to return to the ring while watching her former sparring partner — and her last competitive opponent — Kellie Harrington win Olympic gold in Tokyo.

Nugent returned to the boxing gym with grandfather ‘Nugget’ and, after significant training, entered the Ulster Elite Championships last October. As the only competitor to put her name forward at 66kg (welterweight), she was crowned champion by default without throwing a punch.

Nugent was consequently invited for a performance assessment and sufficiently impressed to be selected to compete for Northern Ireland at the Commonwealths in Birmingham — but she had to enter in the 66-70kg (light-middleweight) bracket as the old 66kg-limit division had been dropped from the Games.

Absolutely unbelievable. Éireann Nugent stepped away from boxing aged 18. Inspired by Kellie Harrington’s Olympic gold, she came back after 11 years (Harrington her last opponent in 2011).

Selected for NI and seals medal in first bout back with a massive upset over England. pic.twitter.com/uAkp9365wj

In her senior international debut at the age of 30, fighting above her natural weight, Nugent was a rank underdog against Leeds’ two-time English champion Wilkinson.

Although the Irishwoman battled gamely in the opening round, an English victory felt inevitable as soon as it became apparent that all five judges had, justifiably, awarded it to Wilkinson, who had produced the more polished work while Nugent attempted to force a battle at closer quarters.

The second was an entirely different story, however, as Nugent ground her way into the ascendancy, marching Wilkinson backwards and lacing her to both body and head in bunches of punches. Wilkinson had few answers and was warned against holding in her efforts to stifle the Nugent onslaught.

Three of the five judges scored the second to the Belfast woman. That left the scores at 19-19 x3 and 20-18 x2 to Wilkinson. In other words, the bout hung in the balance of those three judges who had the bout even going into the last.

A frantic finale beckoned as Nugent again swarmed forward and Wilkinson did her level best to box her way back into control from the outside. Suddenly, though, the bout was all but over as a contest: Such was Nugent’s pressure, Wilkinson received a formal warning — ie she had a point deducted — for holding, meaning the Irishwoman had to only avoid disaster to the final bell in order to have her hand raised and reach the last four. 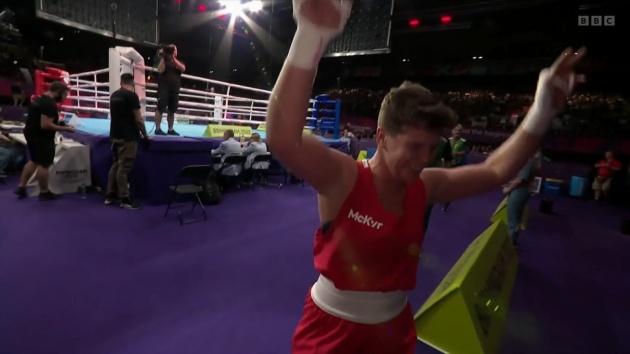 Éireann Nugent celebrates a comeback for the ages.

That she did, much to the Englishwoman’s conspicuous disappointment. Nugent, meanwhile, collapsed to her knees in celebration at the verdict and her jubilation continued all the way out of the arena. She fist-pumped and shouted to recognizable faces on her long walk, the magnitude of her comeback becoming real.

All that’s left is to decide the color of her medal.

Nugent will face Wales’ Rossie Eccles in her 70kg semi-final, where she will seek to upgrade bronze to a place in the decider and a shot at gold.

earlier today, Belfast’s Carly McNaul made her a double and Tyrone’s Jude Gallagher continued to catch the eye of promoter Eddie Hearn as they guaranteed Team NI’s first and second boxing medals respectively.