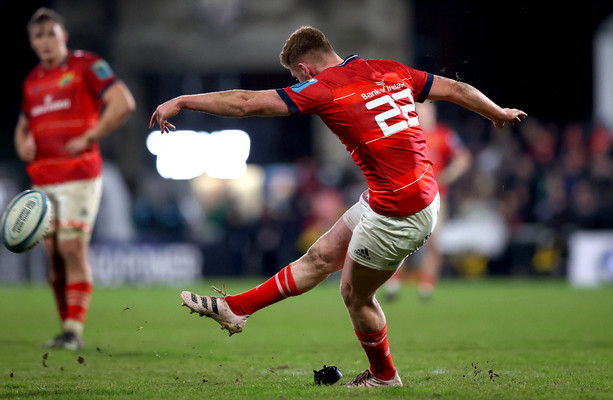 FLY-HALF BEN Healy came off the bench and scored a crucial last-gasp try to help turn things around and allow Munster to snatch victory from the jaws of defeat for a dramatic 15-14 win over Ulster at Kingspan Stadium.

Having trailed for the majority of the game due to three first-half penalties from John Cooney, and seemingly done and dusted when Rob Baloucoune went over for a try with just over ten minutes left, the visitors dug deep and produced the goods late on gain revenge for the 15-14 loss they suffered in the reverse fixture at Thomond Park earlier this season.

Paddy Patterson had hauled Graham Rowntree’s side back into the game early in the second half and it looked like they were happy to settle for a losing bonus point when Healy kicked a penalty with five minutes remaining.

But just when it seemed like Ulster would hold on, Jack Crowley produced a moment of magic to wriggle away from a host of tacklers and sear into the Ulster 22 and, off the resulting penalty, Healy sniped over from close range to send the fans away into raptures.

Both sides will hope that the fare they served up does not set the tone for the year ahead, with this a game that will quickly be forgotten by the sold-out Kingspan Stadium crowd, but Munster will hardly care as they pick up a valuable four points away from home that takes them up to ninth, just one point off the playoffs.

Ulster have to go back to the drawing board. Having survived Connacht’s late comeback in last week’s game in Galway by the skin of their teeth, this time they were unable to close out for the win at home.

Ulster dominated the early exchanges, both in the possession and territory stakes, but had to fall back on the boot of Cooney, the scrum-half knocking over three quickfire penalties in the space of ten minutes from three almost identical positions.

But the momentum swing when prop Marty Moore was stretched off in the 30th minute, audibly in agony after getting his leg caught the wrong way in a tackle, and after Dave Kilcoyne got the better of Moore’s replacement Gareth Milasinovich, the visitors cranked up the pressure .

As Graham Rowntree’s side powered towards the line, Ulster conceded three quick penalties, the latter of which saw Tom Stewart sent to the sin-bin for repeated infringements.

It looked like the southern province were going to make a one-score game at the break, but a herculean defensive effort from the home side held them at bay.

However, having held out so well at the end of the first half, Ulster’s defense would be breached inside the opening four minutes of the second.

Gavin Coombes almost sent Keith Earls over the line shortly before they did score, the number eight’s creative stab kick to the corner only just fielded in time by Jacob Stockdale, but Munster kept up the pressure off the clearing kick and Paddy Patterson showed great instincts to snipe down the blindside and over. 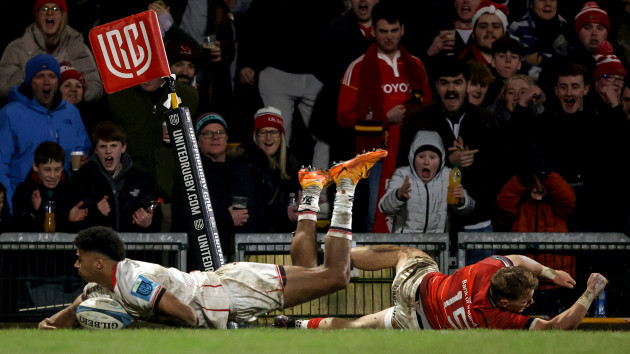 Baloucoune then scored what looked to be the clinching try for the home side, McCloskey launching a cannon of a pass to the wing for the returning Ireland star and he turned on the afterburners to score.

However, Doak’s missed conversion would prove costly, and Healy converted a penalty shortly after coming on to make it a one-score game again.

And at the death, Munster’s two fly-halves got the job done.

Crowley made the impossible break as he seemed to shrug off an unlimited number of tacklers to take play from halfway into the Ulster 22, and after the Munster forwards had set the platform, Healy was the one to barrel his way through a tackler and place the ball down for the try.

The fly-half still had to add the conversion, as simple as it was in front of the posts, but that was never in doubt. Smash and grab – not that Munster will mind at all. 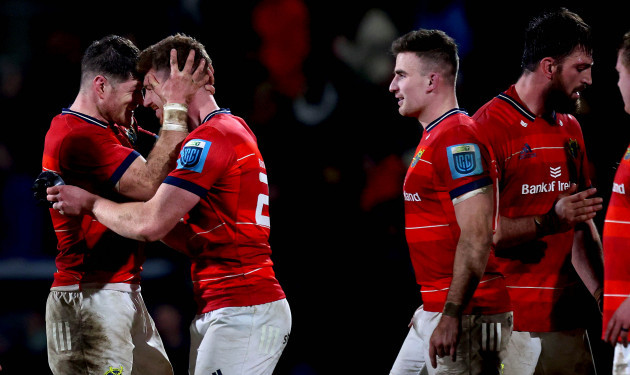