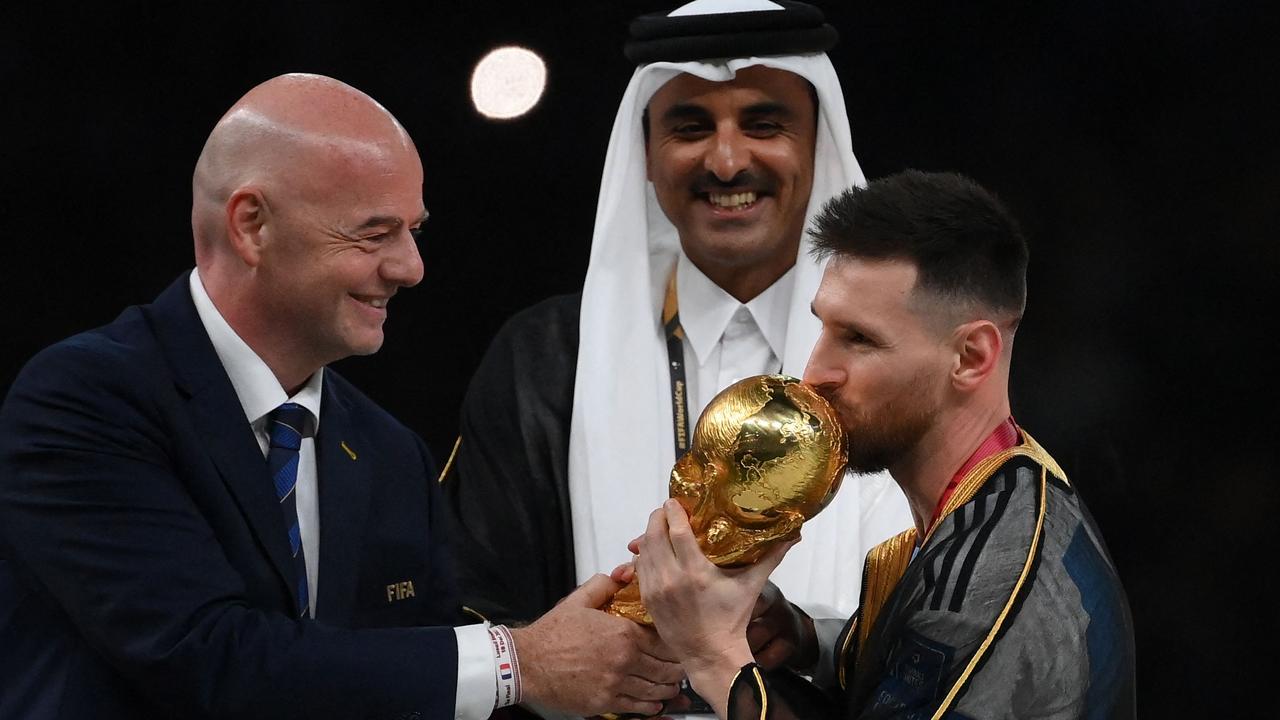 Qatar’s controversial World Cup had a dream finish and some big calls now loom for FIFA that will shape the future of the tournament — for better or worse.

With the dust still settling on Sunday’s unforgettable World Cup finalattention has turned to the future with major changes on the way for 2026 and beyond, with perhaps more coming.

This was by far the most controversial World Cup in history and while many insist it will always be stained by human rights criticisms and allegations of corruption, the hosts — and world football’s governing body came out as big winners.

‘QATAR GOT WHAT IT WANTED’

A World Cup already considered one of the best ever in terms of football got its perfect ending when Lionel Messi and Argentina triumphed on penalties over Kylian Mbappe and France in a thrilling 3-3 final at Lusail Stadium.

James Olley, writing for ESPNsaid it was the perfect script for the controversial hosts.

“So it turns out you can buy football history” he wrote. “From its inception, the 2022 World Cup in Qatar has been blighted by allegations of corruption and off-field controversy, yet it climaxed on Sunday with a showpiece that has a powerful case for being the best final of all time.

“It really could not have been scripted more perfectly for the host nation.

“… Time will tell if there is a positive political or social legacy from these finals. The sporting legacy is already secure.”

Martyn Herman, writing for AP shared the sentiment: “whatever happens, a tournament ridiculed in the build-up and which began a little awkwardly delivered an exhilarating rollercoaster ride that even the cynics leapt on board.

“Millions of words were written criticizing the choice of Qatar as host to the world’s second-largest sports event and the debate will continue long after the last ball is kicked.

But for a month the so-called beautiful game did, in the words of FIFA president Gianni Infantino, spread some joy.”

‘DON’T DO THAT’: Argentina keeper stuns with X-rated trophy gesture

Tariq Panya, writing for the New York Times said “Qatar got what it wanted” as a result of the spectacle.

“The tiny desert state, a thumb-shaped peninsula, craved nothing more than to be better known, to be a player on the world stage, when in 2009 it launched what seemed like an improbable bid to stage the men’s soccer World Cup, the most popular sporting event on Earth,” Panja wrote.

“Hosting the tournament has cost more than anyone could have imagined – in treasure, in time, in lives.But on Sunday night, as the fireworks filled the sky above Lusail, as the Argentina fans sang and their star, Lionel Messi, beamed while clasping a trophy he had waited a lifetime to touch, everyone knew Qatar.

“… Backed by seemingly bottomless financial resources to fuel its ambitions, Qatar embarked on a project that required nothing less than the building, or rebuilding, of its entire country in service to a monthlong soccer tournament. Those billions were spent within its borders—seven new stadiums were constructed and other major infrastructure projects were completed at enormous financial and human costs.

“But when that was not enough, it spent lavishly outside its boundaries, too, acquiring sports teams and sports rights worth billions of dollars, and hiring sports stars and celebrities to support its cause. And all that was on display Sunday. By the time the final game was played in the $1 billion Lusail Stadium, Qatar could not lose.”

The GOAT prevails despite Mbappe heroics | 01:18

Miguel Delaney, writing for the Independentsuggested Qatar got lucky in the way the tournament played out.

“It was enthralling. It was also entirely independent of the hosts. What Qatar was like as the stage was irrelevant to what the football was like as sport. It is ludicrous, and a last attempt at political appropriation, to try to claim that had anything to do with the hosts,” he said.

“The football happened in that way because of multiple factors related to the evolution of the game, with the grandest influence being the great meaning of the World Cup itself. Its image, put very simply, is inspiring. That’s one other reason it’s impossible to take your eyes off.”

Delaney added that this World Cup was all about “image” for the hosts and the game.

“It is true of literally every facet of this World Cup, that Qatar and Infantino are so willing to congratulate themselves over.”

THE FUTURE IS … BIG. BUT AT WHAT COST?

Qatar’s spectacle wasn’t just compelling, it was highly profitable, with the tournament reportedly generating record revenues of £6.2billion ($A11.2bn) — an increase of £840million ($A1.5bn) on the 2018 event in Russia.

And according to a Daily Mail report the result has Infantino now pushing to hold the World Cup every three years as part of a long-term plan to “revolutionise international football”.

That could not happen until at least after 2030 and it’s likely there would be strong pushback from those worried it will cheapen the prestige of the tournament, but Infantino’s revolution is already underway.

After successfully staging the most compact World Cup in history, FIFA is now preparing to organize the biggest.

For the first time, football’s greatest tournament will be held across three host nations — the United States, Canada and Mexico — and notably see an expansion to 48 teams, up from the current 32-team format that has been in place since 1998.

The biggest beneficiaries of the expansion to 48 teams will be Africa and Asia, where the Socceroos play. Under the new format, Africa will receive nine qualifying slots for the finals (compared to five previously) while Asia will nearly double to eight (from 4.5 slots).

Oceania, traditionally forced to compete for a World Cup place via a playoff, will receive an automatic qualifying berth.

Europe’s representation will also be boosted, up to 16 teams from 13, while South America increases from 4.5 qualifying places to six.

With Canada, United States and Mexico qualifying as hosts, CONCACAF will have another three spots, for a total of six teams from the region.

Two additional places will be decided by playoff.

What this expansion means for the tournament format remains to be seen. FIFA initially indicated that it favored 16 groups of three teams, with the top two in each group advancing to a 32-team knockout stage.

But the success of the four-team group first phase in Qatar — where several groups went down to the wire — has prompted a rethink. Infantino told reporters in Qatar FIFA now plans to “revisit” the three-team group format.

The likeliest 2026 scenario is 12 groups of four, with the top two teams advancing to the knockout rounds along with the eight best third-place finishers.

That format however would mean 104 matches — up from the 64 in Qatar — while a team reaching the final would be required to play eight games.

The number of venues for the finals will double, from eight stadiums in Qatar to 16.

Eleven venues will be in the US, with three in Mexico and two in Canada. All of the US games are taking place in venues used by NFL teams, with stadiums such as the $US5 billion SoFi Stadium in Los Angeles and the New York Giants’ 82,000-seater MetLife Stadium in East Rutherford tipped to host the final.

The bulk of the games — including all matches from the knockout rounds onwards — will be held in the United States.

Given the geographical spread of the tournament, FIFA is studying basing the teams in regional clusters to minimize travel.

“When you’re dealing with such a large region as North America we need to care about the fans and make sure that teams are playing in clusters, that fans and teams don’t have to travel crazy distances,” Infantino said earlier this year .

Infantino expects it will result in even bigger revenue increased.

“We are bullish about the power of football,” Infantino said. “We are convinced the impact of the game will be massive.

“It has been massive here and it will be incredible in North America.”

Infantino’s push to hold a World Cup every two years was shot down amid fierce criticism with his plans to hold a triennial event already sparking similar concerns and accusations of greed.

Paul MacInnes, writing for The Guardiansaid the proposal faced stiff challenges but it was not far fetched in reality.

“A triennial men’s World Cup would mean a complete change in the global fixtures calendar, which caused much of the opposition to a biennial World Cup, an idea first floated last summer and killed off in the new year,” he said.

“Infantino’s desire to host his flagship tournament more frequently is shared by nations in Africa and Asia, however, and could get closer to reality if other stakeholders are brought on board.

“One group likely to be wooed in the short term are club sides in Europe’s top divisions. Last week Infantino announced that an expanded Club World Cup featuring 32 teams would be launched from 2025. Previous versions of this idea fell apart during the pandemic but had offered 24 clubs the prospect of sharing prize money of more than $2bn.

“If Fifa were able to deliver a club competition with similar levels of reward in 2025 then European clubs would no doubt be tempted to join, weakening the resistance to Fifa’s other proposed reforms currently channeled through Uefa.

“Still, the question remains as to how Fifa would be able to raise the money necessary given tighter financial conditions across the globe. Some seasoned Fifa observers suggest the best prospect would not be through banks but the Gulf; perhaps the state of Saudi Arabia, which is keen to host the World Cup in 2030.

“Whatever the outcome, events of the past few weeks in Qatar appear to have revived Infantino’s ambitions for the expansion of Fifa.”