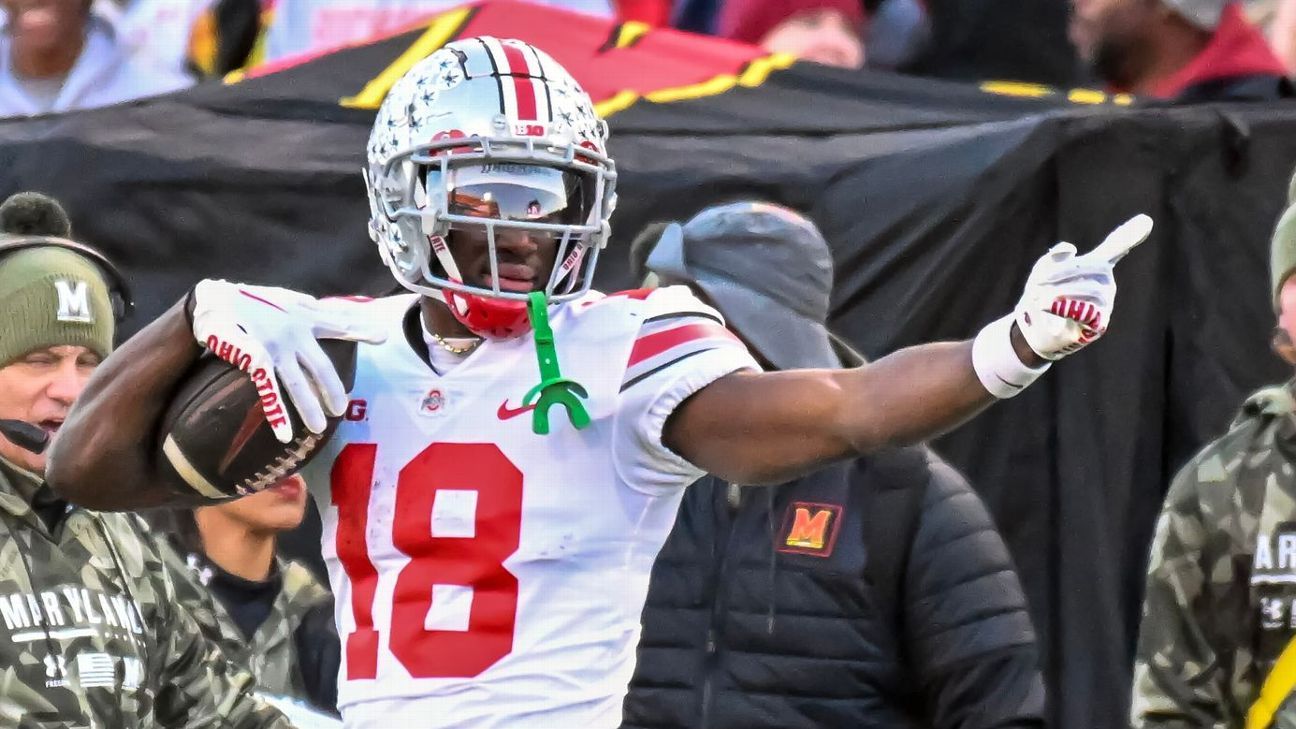 The 2022 season was chock full of brilliant performances on some of the biggest stages, from Caleb Williams helping transform USC into a playoff contender to Blake Corum‘s eight straight 100-yard games in helping Michigan win back-to-back Big Ten titles to Marvin Harrison Jr.‘s emergence as arguably the country’s most exciting receiver.

They’ll be among the stars on hand for the Home Depot College Football Awards on Thursday (7 pm ET on ESPN/ESPN App) as the top players are honored and many of the country’s most prestigious awards are handed out.

Here are our picks for who should — and who will — pick up some prized hardware Thursday.

Who should win: Anderson The Alabama edge rusher had 51 tackles, 17 going for a loss, 10 sacks and 12 QB hurries — all of which counted as something of a down year by his standards. There’s no defender in the country more feared — and more productive — than Anderson.

Who wants to win: Anderson

Who should win: Harrison. With a number of Ohio State’s key skill position players injured, Harrison blossomed into the most formidable pass-catcher in the country this season. His 1,157 receiving yards were second most in the Big Ten, his 12 receiving TDs tied for the Big Ten lead, and he was Pro Football Focus’ highest-graded receiver in the nation. For the season, Harrison had just two drops and reeled in 56% of his contested catches, the second-best rate in the nation.

Who wants to win: Harrison

Who should win: Dunn in a close one. While Karty didn’t miss a field goal try this season, he had seven fewer attempts than Dunn, who was also perfect on PATs (while Karty was 24-of-25). Dunn connected on 24 field goals, which was 10-of-11 beyond 40 and hit on both of his attempts of 50 yards or more.

Who wants to win: Slim

Who should win: South Carolina’s Kai Kroeger wasn’t a finalist, but he’s likely to top plenty of All-America lists after leading the country with 51.9% of his punts downed inside the opponent’s 20-yard line and 25% inside the 10.

Who wants to win: Baringer. This award tends to come down to the headline numbers, and Baringer has a handle on those. He led the nation with an average of 49 yards per punt and 45.7 net.

Who should win: hooker Perhaps this is a chance for a makeup call for snubbing hooker as a Heisman Trophy finalist, but the truth is, until his injury, he was clearly the best player in the country. His 89.4 total QBR is ahead of Stroud (87.7) and Williams (86.5), and his 27-to-2 touchdown-to-interception ratio is tops in the country. More importantly, he completely elevated Tennessee football this season, putting the Vols within striking distance of a playoff bid before getting hurt in the penultimate game of the regular season against South Carolina.

Who wants to win: Williams. He finished third nationally in total yards and first in touchdowns while turning the ball over just four times. That’s a pretty simple case to make.

Who should win: Williams. How close are the numbers between Stroud and Williams? Stroud completed 66.2% of his throws. Williams completed 66.1%. Stroud threw 37 touchdowns. So did Williams. Stroud averaged 9.4 yards per pass. Williams averaged 9.1. Stroud had seven turnovers. Williams had five. But the slight edge goes to Williams, who did more with his legs and dealt with a much less consistent offensive line (29 sacks compared with just eight for Stroud).

Who wants to win: Williams

Who should win: kancey The ACC’s defensive player of the year was an absolute monster on the interior of Pitt’s defensive line in 2022. Kancey racked up seven sacks and 14 tackles for loss while adding 10 QB hurries on the season. He was the second-best Power 5 interior lineman, according to Pro Football Focus, after Georgia’s Jalen Carter, who missed multiple games. While it’s impossible to directly compare Kancey’s performance with two offensive linemen, his work was awfully reminiscent of another Pitt great — Aaron Donald. And if a player is drawing those comparisons, it’s easy enough to see why he might win the Outland Trophy, just as Donald did in 2013.

Who wants to win: kancey

Who should win: Witherspoon. Yes, Phillips is among the most impressive players in the country, and his six interceptions will turn heads with voters, but on a down-for-down basis, Witherspoon has the edge. He was the top-graded Power 5 corner, according to Pro Football Focus, allowing just 16 completions on 54 targets — with none going for touchdowns. He bested Phillips in yards allowed per coverage snap, yards per target and contested targets. And while Phillips did have a distinct edge in INTs (six to three), Witherspoon added another 14 pass breakups to Phillips’ six.

Who wants to win: Phillips. Hey, interceptions look great on a box score, and the truth is, Phillips genuinely is among the best players in the country — even if Witherspoon’s stat line was a tad better.

Who should win: Robinson. Playing behind either a freshman or backup QB all season, Robinson was the focal point of every defense Texas faced, and he still finished the season with 1,580 rushing yards and 18 touchdowns. His 1,894 scrimmage yards led the nation, and his 20 total touchdowns ranked second behind Pitt’s Israel Abanikanda. Robinson also finished the season as the hottest player in the country, topping 100 yards on the ground in nine of his last 10 games, including more than 200 twice.

Who wants to win: Corum. Robinson might edge him out after Corum was injured late in the Nov. 19 win over Illinois, but for the first 10 games of the season, Corum was the clear-cut top back in the country and a Heisman contender. He still finished with 1,463 rushing yards and 18 touchdowns — numbers comparable to Robinson — and voters might forgive the late-season absence to reward the player who carried his team the furthest. That’s clearly Corum.

Who should win: mayer He was the point man in Notre Dame’s offense this season, and he delivered huge results. Mayer was second nationally among tight ends in catches (67), yards (809) and yards per route (2.57), and he led all tight ends with nine touchdown grabs and 20 contested catches. But what sets him apart from Bowers and others is his impressive blocking. He blocked on 417 snaps this season and missed just two of them.

Who wants to win: mayer

Who should win: Oluwatimi. The Virginia transfer blossomed as the leader of Michigan’s offensive line this season, allowing just two pressures and no sacks while missing just a handful of blocks on the year. Oluwatimi blocked for one of the most effective ground games in the nation and kept QB JJ McCarthy in a clean pocket routinely. The result was a second straight Big Ten title for the Wolverines.

Who wants to win: Oluwatimi