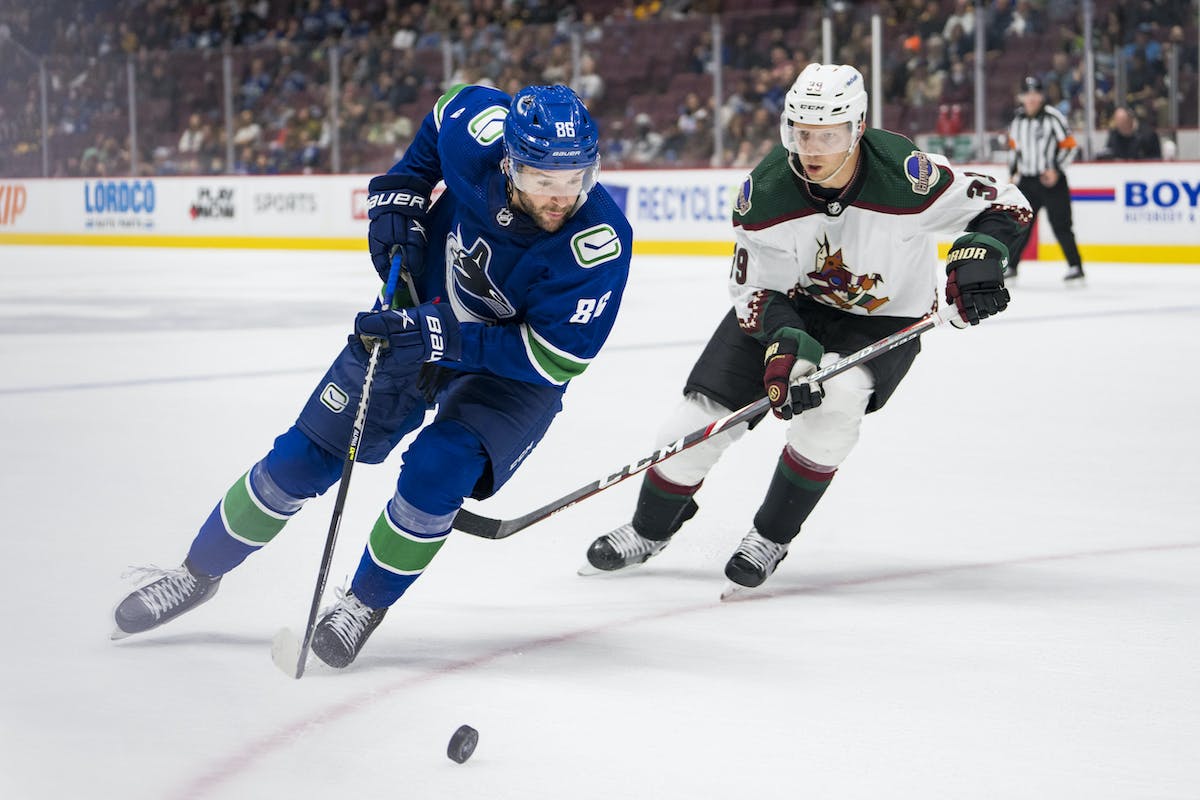 ‘I’m confident in the way that I’m playing right now’: Christian Wolanin earned more than his NHL call-up to the Canucks

After putting up 21 points in his last 12 AHL games, you could guess that Christian Wolanin’s confidence is sky-high in his first season with the Canucks’ organization.

The 27-year-old has battled through adversity over the past few years. He was primarily a taxi squad guy during the 2020 COVID season after only playing in 12 pro games in 2019-20 due to a shoulder surgery that hurt his confidence as a player.

The whole taxi squad experience can be draining to a pro hockey player who just needs to practice every day and rarely see game action. After bouncing around the NHL as a depth defenseman, Wolanin found himself as primarily an AHL played last season — playing 37 games in the minor leagues while only suiting up for nine NHL games.

“When you watch [from the press box] and then when you go into the lineup and play 12 minutes, it’s tough for anybody to have confidence during those 12 minutes,” Wolanin told CanucksArmy after Wednesday’s Abbotsford Canucks game.

“It’s inconsistent when you’re playing three minutes a period and then the graveyard shift at the end of the game. I don’t care who you are, it’s really tough. So truthfully, I’m just thankful for the opportunity [in Abbotsford] from these coaches to give me a chance to play hockey and I truly believe that if I get the chance to play, I can make things happen.”

After Tuesday’s promotion to the NHL, Wolanin may soon be getting that chance to make it happen at the NHL level.

General Manager Patrik Allvin announced today that G Thatcher Demko has been placed on injured reserve and D Christian Wolanin has been recalled from Abbotsford (AHL).

Confidence is key with any athlete, and after putting up 10 points in four games and being named the AHL’s player of the weekWolanin has been showing that he is well deserving of a chance to show his stuff at the NHL level.

Wolanin had a strong preseason and was relied upon to play big minutes in their 7-2 loss against the Edmonton Oilers. In a game where only three players had their heads above water when it came to possession numbers, Wolanin logged a team-high 22:12 and had some good plays against a much more NHL-worthy Oilers preseason team.

the #Canucks power play break through as Christian Wolanin puts a perfect pass on Nils Höglander’s stick. Höglander finishes it off with a quick wrister to tie the game at 1. pic.twitter.com/JqxQcvh3Wt

“I’m pretty confident in the way that I played in the preseason,” said Wolanin with a smile. “I’m confident in the way that I’m playing right now.. I just try and play my game down here [in Abbotsford]. I care a lot about this team. I care a lot about my teammates and the staff here. I want to win games for the Abbotsford Canucks and the business side of things or whatever you want to call it — I’ll just let it happen.”

And happen it has, as the 2015 fourth-round pick of the Ottawa Senators simply put his head down and went to work in the AHL. Wolanin has been fully focused on doing everything that he can to help get his AHL team to win and the hard work and keeping his head down has earned him a call-up to the NHL.

Another piece of Wolanin’s game in the AHL is his ability to kill penalties. He’s typically used as the second defense pairing while shorthanded but is relied upon to play heavy minutes while shorthanded. He hasn’t always been a penalty killer as a pro but just loves to be out on the ice to help his team no matter the situation.

“I just love playing hockey, it doesn’t matter if it’s five-on-five, five-on-four, four-on-five — whatever it is, whenever I get an opportunity, I’m thankful for it and try to take advantage of any situation. If they want me in on the penalty kill, I’ll do my best for the coach and try and learn, I’m just confident in my abilities.”

Wolanin’s best strength is his puck-handling and puck-moving ability. At the AHL level, he is the best puck-moving defenseman on the ice most nights. His offensive numbers this season have been damn impressive and with the confidence of a 12-game point streak in his backpack, he’s feeling good with the puck on his stick. Wolanin has 24 points in 20 AHL games this season and is currently second in points from a defenseman in all of the AHL.

Time will tell if he can translate his AHL success to the NHL level this season but with some question marks around some other defensemen’s ability to be everyday NHLers, Wolanin may find some NHL time over the next few weeks.

Christian Wolanin has played in 70 NHL games over five seasons and has recorded six goals and 14 assists over those 70 games. He’s also played 16 games with Team USA at the World Championships over the past four years.

Wolanin does a good job of moving the puck and works hard on every shift. He’s worth a look.