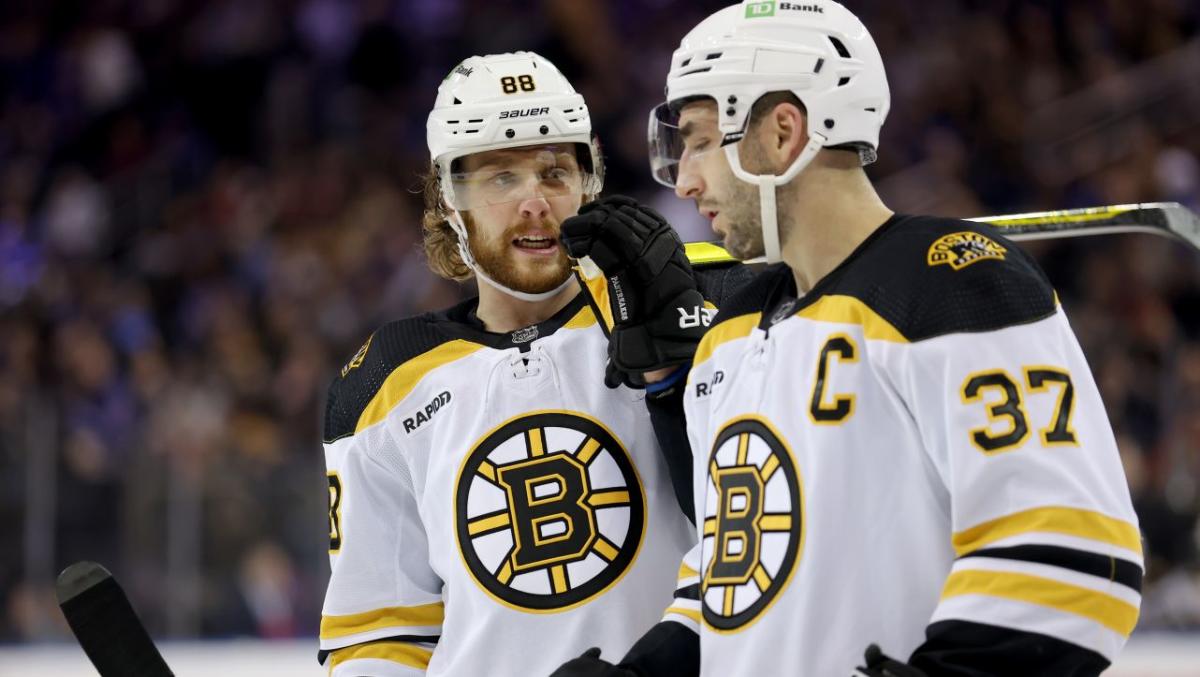 This extraordinary success should result in some well-deserved individual awards, too. Several Bruins players are in the mix for the league’s end-of-the-year trophies.

Here’s a look at the top award candidates from the Bruins (all advanced stats via Natural Stat Trick).

Awarded to the MVP

It’s going to be super tough for anyone to top Edmonton Oilers center McDavid for the league’s MVP award. He’s on pace for a ridiculous 150 points (68 goals and 82 assists). He’s the No. 1 reason why the Oilers are in a wild card playoff spot.

That said, Pastrnak could make a somewhat decent case for this award if he tops 60 goals, 120 points and the Bruins win the Presidents’ Trophy. But even if all of those scenarios happen, it probably still won’t be enough for Pastrnak, which shows you how incredible McDavid’s season has been.

Awarded to the leading scorer

Pastrnak has a chance, but it’s a slim one. And it’s through no fault of his own, either. It’s crazy that Pastrnak is scoring at a very impressive 1.4 points per game rate and still finds himself trailing McDavid by 23 points. Pastrnak is on pace to tally 115 points, which would have been enough to claim the Art Ross Trophy in five of the last seven 82-game regular seasons. And yet in 2022-23, 115 might not even be close to first place.

Awarded to the leading goal scorer

This is one where Pastrnak has a very real shot.

The superstar right wing enters Friday with 35 goals, which is four behind McDavid. Pastrnak has played two fewer games, though, so he’s doing a pretty good job keeping pace with McDavid.

This race should be pretty close and could easily come down to the last couple regular season games. Both of these players are elite goal scorers and it’s difficult to imagine either one going through a prolonged slump.

Awarded to the best goaltender

One question surrounding the Bruins all season has been: Can Ullmark really keep up this elite play? The answer through 45 games is a resounding yes.

Ullmark has been consistently elite throughout the campaign. He has allowed two or fewer goals in 21 of his 27 games played. He’s allowed more than two goals in consecutive games only once. Whether you look at 5-on-5 numbers or all situations, Ullmark is superior to his peers. He’s also a major reason why Boston has the top-ranked penalty kill at 87 percent.

There are a couple other goalies in the mix, and Ullmark hasn’t put away the race just yet. However, the stats speak for themselves.

Awarded to the best defensive forward

Bergeron continues to be the league’s premier two-way forward. The Bruins account for 60.4 percent of shot attempts, 61 percent of shots on net and 71.4 percent of all goals when Bergeron is on the ice at 5-on-5. He’s been on the ice for 10 goals allowed at 5-on-5, which is tied for the lowest total among forwards with 500-plus minutes played. Bergeron ranks No. 2 in expected goals against (16.38) and no. 1 in expected goals-for percentage (65.1). The Bruins also have an absurd .959 save percentage at 5-on-5 when Bergeron is on the ice — the highest of any player in the sport.

We could go on, but you get the picture.

Marchand marvels at Bergeron’s toughness after taking puck to face

Seeing Bergeron as the favorite for this award again might be getting old for some fans across the league. But the reality is this isn’t a lifetime achievement award situation — Bergeron is actually the top candidate, and it’s not a very close race.

Awarded to the best head coach

Bruins in the running: Jim Montgomery

This is an easy one. Montgomery is by far the top candidate for this award.

Not only are the Bruins winning games at a historic pace, the players have consistently attributed a good portion of their success to Montgomery and his coaching style/tactics.

He’s running away with this award.