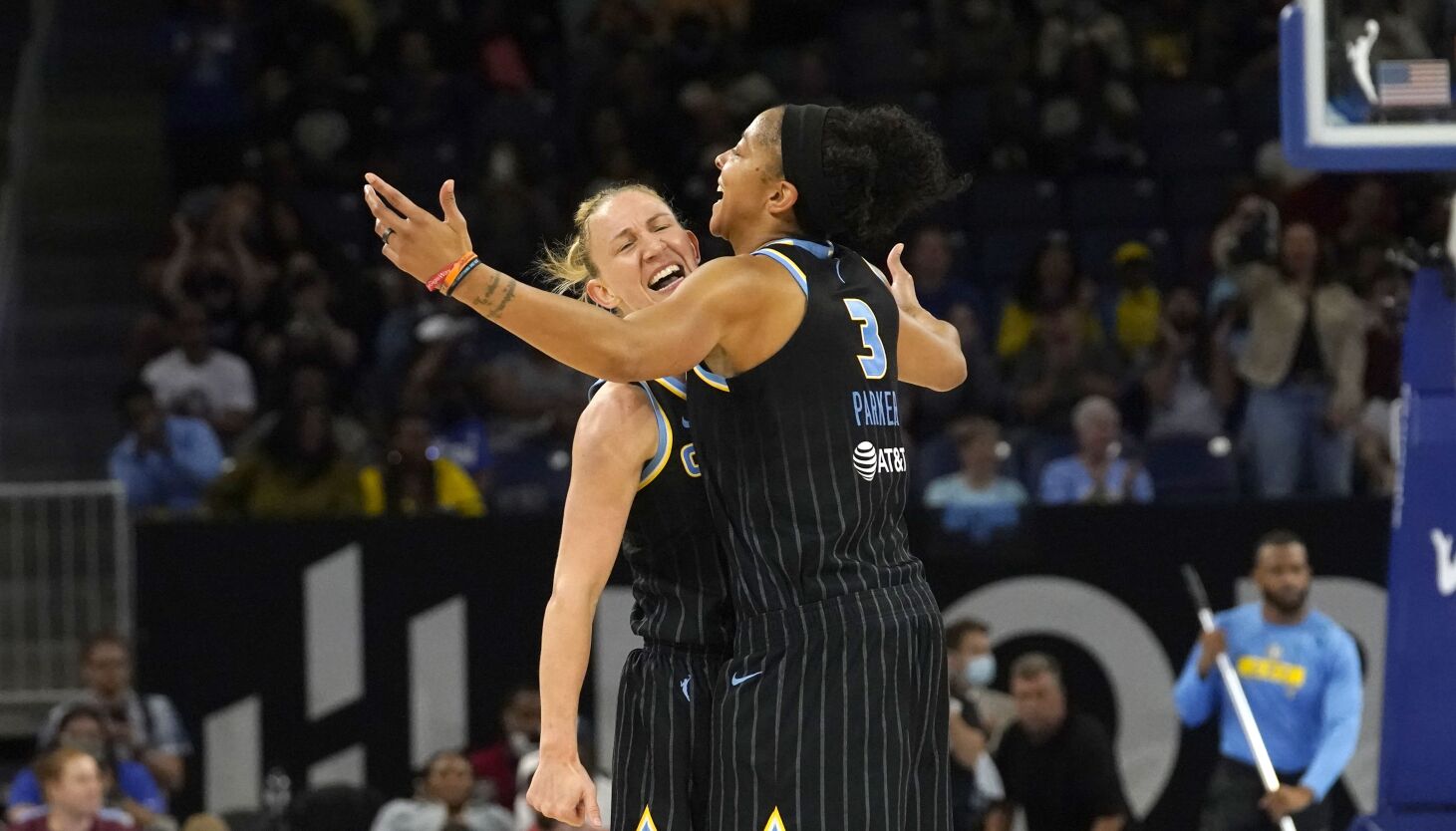 WNBA free agency is officially underway, with Saturday marking the first day players can meet with suitors, and the rumors are rampant.

Unrestricted free agent Breanna Stewart has indulged fans with some emoji repartee on Twitter, further fanning the flames of her free-agency fire. Adding to the intrigue of where Stewart will end up is the possibility of it being with the New York Liberty to form a superteam with 2021 WNBA MVP Jonquel Jones and longtime Sky floor general Courtney Vandersloot.

Candace Parker is listening to four teams, one league source told the Sun-Times, but her decision ultimately will come down to returning to Los Angeles to play for the Sparks or re-signing with the Sky.

Two other hot takes: Stewart and Vandersloot will join forces with the Seattle Storm and Parker will end up with the Las Vegas Aces.

Vandersloot has been transparent about his desire to indulge entirely in free agency. As a player who ranks third on the WNBA’s all-time list for assists, a WNBA champion and the top point guard on the market, it would be wise to assume she is getting interest from every team.

Wondering how to know what to take seriously and what to throw in the trash? Well, let’s start with the teams you met with last year: the Storm, the Minnesota Lynx and the Sky.

Even before Sue Bird retired, the Storm were attempting to lay the foundation of their future by signing Vandersloot in 2022. After Bird’s retirement, it became clear Vandersloot once again would be at the top of their free-agency board. Considering she grew up 20 miles south of Seattle in Kent, Washington, and has spoken about playing in front of her friends and family back home, this is more than just a rumor.

Throw into the mix that she has won championships overseas with Stewart and has developed a relationship with Jewell Loyd, and this is one hot take that has serious weight.

Next, there’s the possibility of a move to the Lynx. Vandersloot met with the Lynx last year and has been linked to the franchise once again. One league source told the Sun-Times the Lynx also might be a potential landing spot for Sky forward Azurá Stevens.

Stevens has received interest from eight of the 12 teams in the league, according to a league source. She is meeting with five teams in the next four days in Turkey, where she’s playing for Galatasaray overseas. The Sky are among her list of contenders.

Stevens would be the Lynx’s answer to the hole left by Sylvia Fowles’ retirement, adding to a frontcourt that includes former UConn teammate Napheesa Collier. But while the Lynx are in need of a point guard, other options will prove more enticing for Vandersloot.

This brings us back to the first scenario, with Stewart and Vandersloot teaming up with the Liberty.

Before free agency began, Jones was dealt from the Connecticut Sun to the Liberty in a three-team trade that sent forward Natasha Howard and the rights to guard Crystal Dangerfield to the Dallas Wings and guard Rebecca Allen, the Liberty’s No. 6 overall pick and guard Tyasha Harris to the Sun.

This move freed up cap space for the Liberty to sign another max player in Stewart, and it still would leave them enough to sign Vandersloot and one more player to reach the WNBA’s 11-player roster minimum. In this scenario, however, Vandersloot would have to sign for less than her market value.

What’s different about rumors surrounding Vandersloot’s free-agent status this year and last is the circumstances in which she entered free agency.

Unlike last year, Sky general manager/coach James Wade doesn’t have the possibility of winning back-to-back titles to sell Vandersloot on. As the Sky’s season ended last year, a disconnect in the team became apparent, resulting in a semifinals loss that made it clear re-signing the core wouldn’t be enough to produce a championship product.

ESPN’s Ramona Shelburne reports that Stewart is meeting with the Storm, Lynx, Liberty and Washington Mystics in Turkey, where she’s playing for Fenerbahce. Shelburne added that Vandersloot’s decision is expected to factor into Stewart’s, signaling the two are about to make a move together and the sky are on the outside looking in.

There’s less to analyze when it comes to where Parker will sign what might prove to be her last WNBA contract. At this stage of her career, Parker isn’t taking a bunch of meetings and only is considering playing for the Sparks and the Sky.

The Aces, however, are an intriguing option. The first thing to consider is Parker’s friendship with point guard Chelsea Gray and their championship history together. The pair won their first WNBA titles with the Sparks in 2016. Plus, Dearica Hamby is rumored to be moved in a trade that might free up the cap space necessary to sign Parker.

Ultimately, Parker is interested in playing for a team that can contend, putting the ball in Wade’s hands to construct a competitive roster — or a more competitive roster than coach Curt Miller’s with the Sparks. Her friendship with 2021 WNBA Finals MVP Kahleah Copper is a strong tie that keeps her tethered to the Sky, but Los Angeles is the city Parker truly calls home, making it an attractive place to write the last chapter in her Hall of Fame story.

Parker is expected to make a decision about where she’ll play her 16th season within the week.