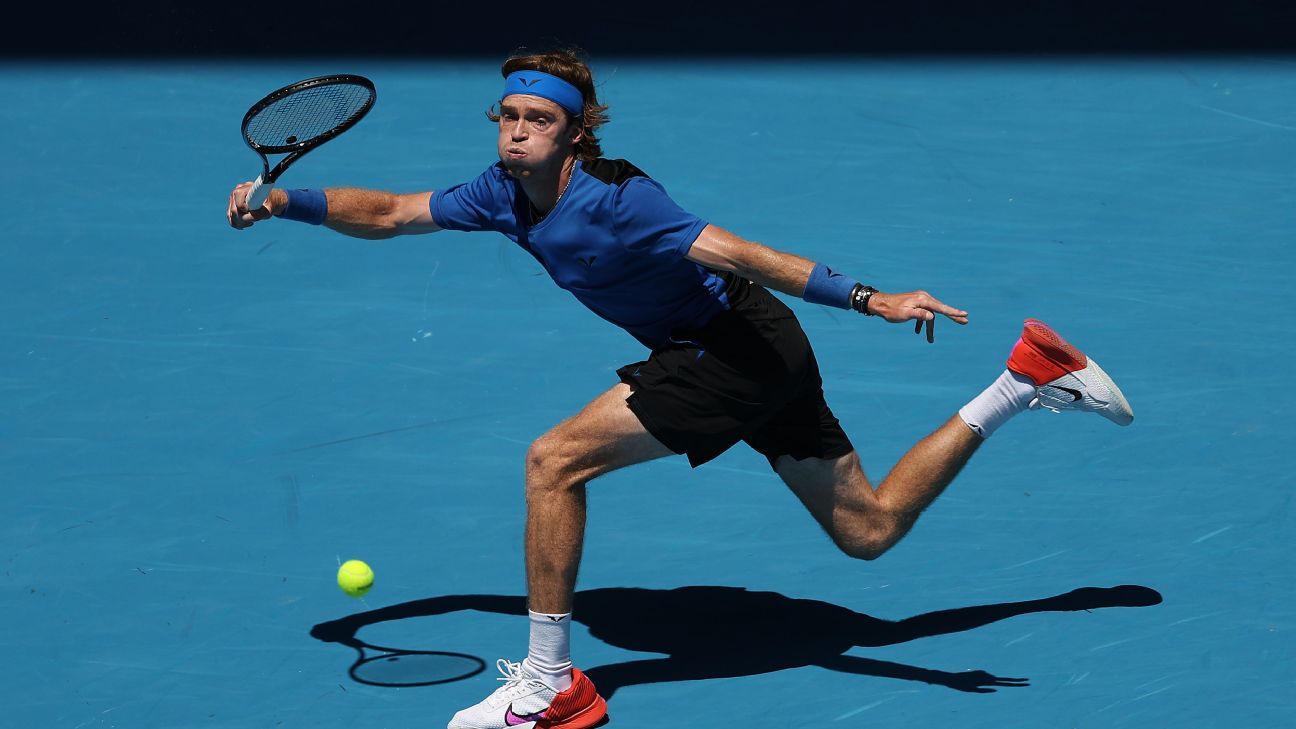 MELBOURNE, Australia — It’s been almost two full decades since this many US men reached Week 2 at the Australian Open.

And while that group in 2004 included a couple of Grand Slam champions in Andre Agassi and Andy Roddickeverything is all so new for the quartet there this time: Tommy Paulwho is 25; JJ Wolf24; Sebastian Korda, 22; other Ben Shelton20, are all about to make their fourth-round debuts at Melbourne Park.

It must feel very much like a chance for a career-defining result for them and other young men still in the bracket.

“I haven’t thought about it too much, honestly, because I just have that one-match-at-a-time mentality, but I think it’s hard for anyone to look past that. There’s been a lot of upsets,” the 67th-ranked Wolf, who played college tennis at Ohio State, said after eliminating lucky loser Michael Mmoh 6-4, 6-1, 6-2 in an all-American matchup on Saturday. “But upsets happen for a reason. A lot of people out here are good. It is a real opportunity.”

Wolf next plays yet another American, 89th-ranked Shelton, who won the NCAA title for the University of Florida as a sophomore last year, then turned pro. Using his passport to travel outside of the United States for the first time in his life, Shelton extended his stay in his Australian Open debut by defeating 113th-ranked Australian wild-card entry Alexei Popyrin 6-3, 7-6(4), 6-4.

That result, the last of the third round, left Novak Djokovic as the only player among the 16 remaining men who has won a Grand Slam title. Not only that, but the other 15 have participated in a combined total of one major final — No. 3 Stefanos Tsitsipas lost to Djokovic in the 2021 French Open final.

This is seen by most as a period of transition in men’s tennisa chance for new faces to make themselves known.

That No. 5 seeds Andrey Rublev, a 25-year-old from Russia, and no. 9 seeds Holger Runea 19-year-old from Denmark, would still be in the bracket, and are set up to face each other for a quarterfinal berth on Monday, should come as a surprise to no one.

Still, neither has been past the final eight at any Grand Slam tournament. Nor has No. 22 Alex deMinaur, a 23-year-old from Australia, who advanced Saturday and now gets the unenviable task of meeting 21-time Slam champion Djokovic. Nine of those titles came at Melbourne Park, and Djokovic has now won 24 consecutive matches there after topping No. 27 Grigor Dimitrov 7-6 (7), 6-3, 6-4 at night despite some more signs of trouble from his left hamstring.

“It kind of always starts well in last few matches, including this one, and then some movement happens and then it gets worse,” said Djokovic, who got his leg massaged by a trainer during some changeovers Saturday. “Yeah, pills kick in. Some hot cream and stuff. That works for a little bit, then it doesn’t, then works again. It’s really a roller coaster, honestly.”

Looking ahead to facing de Minaur in front of what is sure to be a crowd filled with other Australians, Djokovic told the Rod Laver Arena spectators: “I don’t know how many of you will be on my side. I don’t think too many.”

After early losses by high seeds such as No. 1 Rafael Nadalthe defending champion and owner of 22 major trophies (beaten by American Mackenzie McDonald); No. 2 Casper Ruud, twice a major finalist last year (beaten by Brooksby); and no. 7 Daniel Medvedevthe 2021 US Open champ and the runner-up at Melbourne Park each of the last two years (beaten by Korda), have at the very least made some newcomers feel welcome in the latter stages.

Even if they do not want to talk about the disruption in the bracket.

“Of course, I know what’s happening,” said Rune, who appeared to hurt his ankle and wrist in a fall during a 6-4, 6-2, 7-6 (5) win against Ugo Humbert and pronounced himself OK afterwards. “But mainly I just focus on myself.”

“There were some moments before when I feel there is an opportunity to go to semis or even final maybe and, in the end, nothing happened,” said Rublev, who delivered 60 winners. “So this time, I just don’t want to even try to think about opportunity or something.”

The Associated Press contributed to this report